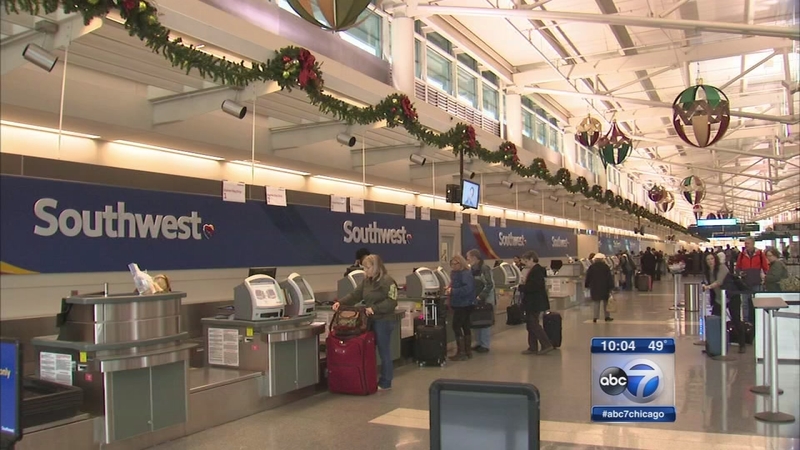 Flight from Midway to Houston delayed

CHICAGO (WLS) -- Southwest Airlines Flight 126 from Chicago Midway Airport to Houston Hobby Airport was delayed after six passengers were removed from the plane.

Southwest flight 126 from Chicago Midway Airport to Houston Hobby Airport was delayed after six passengers were removed from the plane.

Southwest released a statement saying the flight was delayed at the gate "after several passengers refused to follow crew members' instructions."

According to passengers who were on the plane, the men who were removed were going around asking people to switch seats with them so they could all sit together. This apparently caused a commotion and, ultimately, the men were taken off the flight.

Upon arrival in Houston, passengers on the flight said the removed passengers were men of Middle Eastern descent. If true, this would be the second time in as many days this has happened, raising uncomfortable questions as to whether people are being unfairly profiled.

"It's not the American way, but it's understandable why they're doing it, I guess," said John Schipkoski, a passenger on the fight. "It's a tough question."

"There are a lot more terrorist acts in America that are actually committed by people who are white Christians, so I think it's important to really keep things in perspective," said passenger Caitlin Jacobs.

"These are incidents that target individuals that have nothing to do with what happened in Paris," says Ahmed Rehab of the Center for American-Islamic Relations. "They're Muslim or dark-skinned and so they're targeted for abuse or harassment."

The plane was scheduled to arrive in Houston about an hour late. Southwest says the passengers were re-booked for a later flight.

"Safety is our primary focus, and our employees are trained to make decisions to ensure that safety, and to safeguard he security of our Crews and Customers on every flight," the airline said.

Airline passengers are especially anxious about flying after recent terror attacks on a Russian plane and in Paris. And as we approach the busy holiday travel season, nerves may be even more frayed.

Tuesday, four passengers were taken off Spirit Airlines flight 969 from Baltimore to Chicago for what was deemed "suspicious behavior." As it turns out, one passenger was watching the news while the plane was taxiing. The passengers were later released and cleared of any wrongdoing.

On Tuesday night, two Air France flights were diverted after bomb scares. All this, just ahead of the busy holiday travel time.

"Particularly as we approach the holiday season, we continue to encourage the public to travel, attend public events, and freely associate, but remain vigilant and aware," said Jeh Johnson, U.S. Secretary of Homeland Security.

Regardless, one terrorism expert says now may actually be the best time to travel.

"Now that we have millions of people on alert, this is actually the hardest time for terrorists to pull off another coordinated attack," said Dr. Robert Pape, director of the Chicago Project on Security & Terrorism.