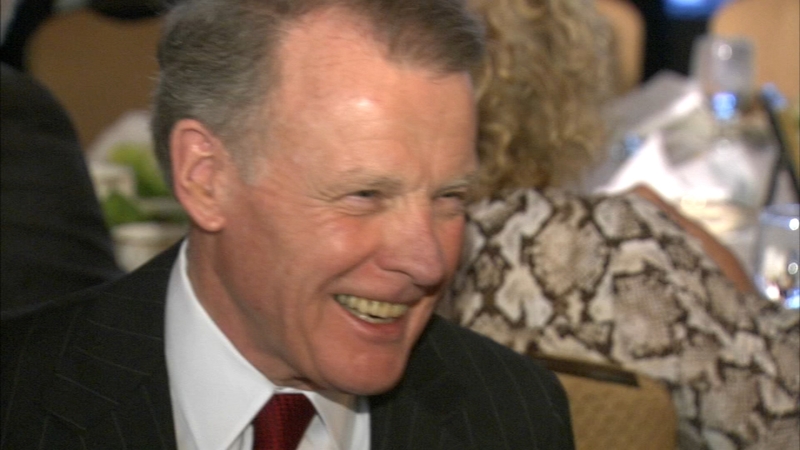 CHICAGO (WLS) -- Mike Madigan, the man long-considered Illinois' most powerful politician, is expected to be prepping for his first court date on 22 federal felonies.

The former Illinois house speaker's arraignment is set for March 9.

The case has been officially under investigation for more than two years, but Madigan has been a top target of federal investigators for much longer.

ABC7 investigative reporter Chuck Goudie with an inside look at the government's case against Mike Madigan.

"The Velvet Hammer" is how Madigan became known years ago for his talent as a smooth operator who could kill it with kindness.

That name began in smoke-filled rooms when those were still a thing; and even though you won't find those words in the indictment, the charges are all Velvet Hammer.

At age 79, Mike Madigan is far from being mistaken as a beefy enforcer. But in the 106 pages of federal racketeering charges, the former house speaker is accused of "threats, intimidation, and extortion to solicit benefits from private parties"... "multiple acts and threats"..."intimidation and threats"..."actual and threatened fear of economic harm."

In racketeering cases against Chicago Outfit bosses, those are fighting words -- literally, when threats and extortion usually involve kneecaps and torture.

"When someone is that powerful, there is a chilling effect on people on doing what they would otherwise do without that power or influence or clout, you know, in their face," Sorenson said. "And, and I think that's why the the law has interpreted that as extortion, too, when it comes to a public official, like Speaker Madigan, to be what other people might think of as bribery."

Sorensen is now a law professor at Northwestern and teaches a class on public corruption.

"Abuse of public office for private gain. We've got that here," Sorenson said. "The abuse of power to retain or consolidate power. And, you also have that here."

U.S. authorities have outlined pages of alleged criminal proceeds from what they call "The Madigan Enterprise." The indictment includes forfeiture claims for $2.85 million that prosecutors say were ill-gotten gains.

Madigan denies it all, saying what the government calls criminal conduct were job recommendations for constituents.

The investigation began in earnest more than eight years ago, when a Chicago alderman started wearing a wire. And, there may have been less focused investigations even before that.