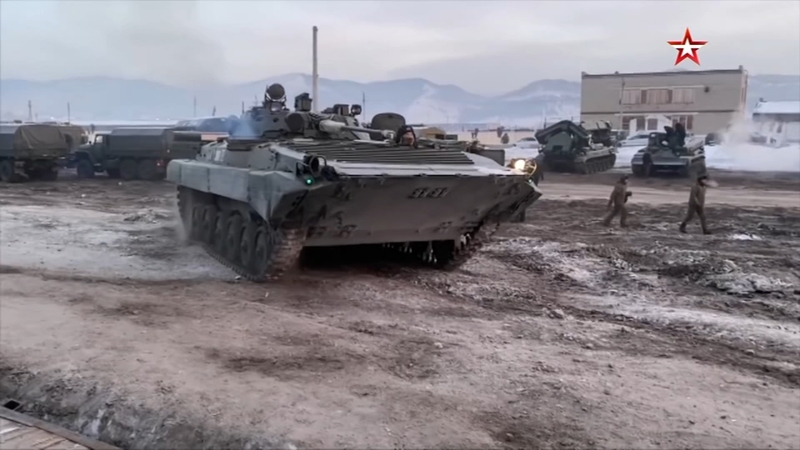 CHICAGO (WLS) -- With thousands of Russian troops now built up on NATO's Eastern flank, U.S. officials are scrambling to prevent a full-blown invasion. As columns of Russian military vehicles and soldiers wind through the hills near Ukraine's border, in Washington the bipartisan Congressional Ukraine Caucus has an ominous message.

In a statement released late Thursday, the caucus wrote, "It is essential for the U.S. and our global allies to speak clearly and with one voice about the severe repercussions the Kremlin will suffer if it escalates its illegal war against Ukraine."

"Putin is doing everything to prepare for an invasion. So it would not surprise me if it happened at any moment," Quigley said. "And frankly, this is the moment I'm most concerned about. We've been watching this for some time. As you know, there were troops deployed along the border in the spring and then, you know, Putin withdrew them. This is, I suspect, that was something of a trial run to let the troops know how to do it, where to go where to line up. This isn't a trial run. And unless diplomacy works, this could become a very grave situation very quickly."

Quigley is a member of the House Select Committee on Intelligence and has been to Ukraine, meeting previously in Kiev with the former president. Now, as Russian men and machines amass on the Ukraine border, what has been a top focus issue for him is more critical than ever.

"If any -- any -- assembled Russian units move across Ukrainian border, that is an invasion. But it will be met with severe and coordinated economic response that I've discussed in detail with our allies, as well as laid out very clearly for President Putin.," President Joe Biden said Thursday.

"There is always time to try. And the most important thing we can do is to make sure our Western Europe our NATO allies are emphatically in line with everyone else," said Quigley. "Hopefully NATO will posture troops and Eastern Europe to again act as a way to convince Putin that this is a very, very bad idea. If he invades you know, all bets are off. Absolutely. Every bit of military assistance we can to help Ukraine defend itself has to happen, and those sanctions have to begin."