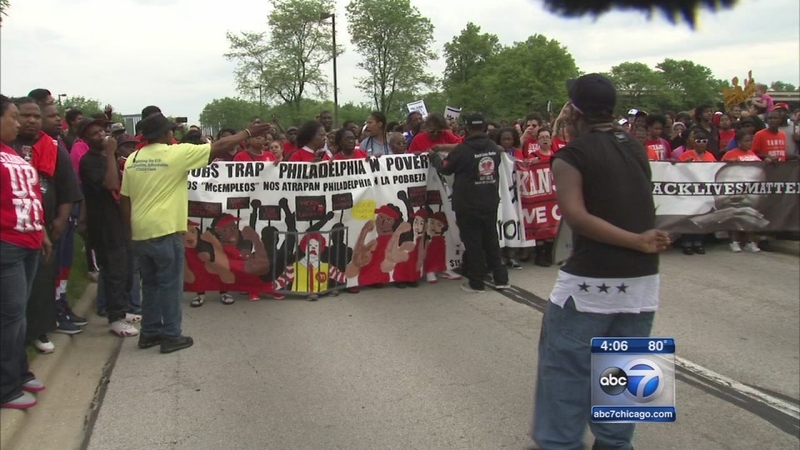 "We work too hard. I do more than one job. We have to clean. We have to stock," said Chanvrica Malone, an Arby's employee from North Carolina.

Protesters from across the country camped out all night to prepare for the 6 a.m. demonstration outside a scheduled meeting of the McDonald's annual shareholder.

Protesters camp out in front of @McDonalds headquarters in Oak Brook. They are asking for $15/hr. @ABC7Chicago pic.twitter.com/JtmqggIhgs

They sprinted to try to get onto McDonald's property and speak to those investors. They were stopped at the entrance by police wearing tactical gear.

Workers stressed that McDonald's stock just hit an all-time high, but the $5 billion company still pays wages so low that many of its workers rely on public assistance. Naquasia LeGrand, of Brooklyn, New York, said she just wants McDonald's to pay her a living wage so she can care for her son.

"The importance of it is to actually get by, not to live paycheck to paycheck. Actually have a little left to spend on ourselves because right now we do not have that. I have a four-year-old son and it's extremely hard to even get him a ball or a toy that he wants," LeGrand said.

"...Last July, we raised wages for all employees at our company-owned restaurants to $1 dollar above the local minimum wage and gave them the ability to earn paid time off..."

But demonstrators said it isn't enough.

"We are not only fighting for better pay, but the right to unionize fast food workers," said Andrew McConnell, a McDonald's employee from Kansas City, Missouri.

Although Thursday's protest was chaotic at times - there was some running and pushing - it was overall a peaceful demonstration. No arrests were made. Jorrie Blvd. was intermittently closed during the demonstration to ensure the safety of protesters and motorists alike, Oak Brook police said.

"We appreciate that the protesters exercised their rights in a peaceful, non-violent manner," said Oak Brook Police Chief James Kruger. "We also want to especially thank the 300 plus law enforcement professionals that assisted us in planning and operations of this demonstration."

As the campaign for higher wages continues the food industry is evolving. In Chicago food truck have changed consumers habits and the next big to change for fast food industry will likely be more automation.

"Companies will say, 'Alright, what's going to cost me either way, is this the time to go invest in this new technology?'" John Challenger of the firm Challenger Gray & Christmas.

For workers in Oakbrook Thursday morning, they are focused on getting higher wages no matter who McDonald's or other companies change their business model.

"I really wouldn't want a machine to check my order," said fast food worker Ernestina Sandoval. "They are already taking our money but my order, I prefer customer service."

Challenger says with more automation fast food jobs shift would shift to others positions that robots can't do.