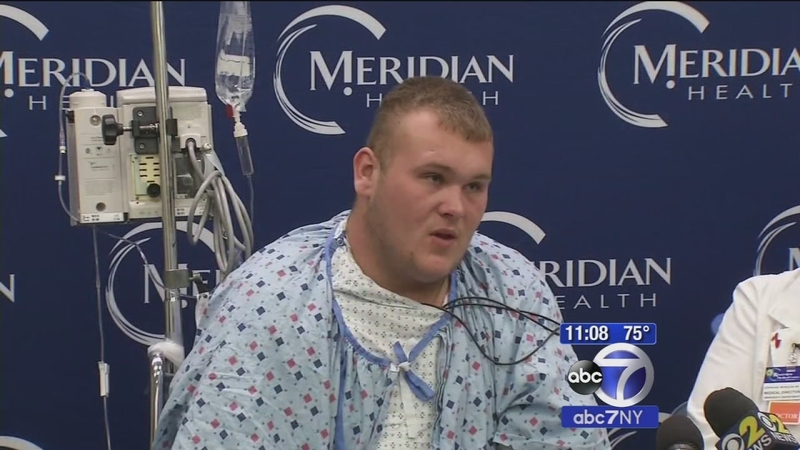 HIGHLANDS, N.J. -- A 19-year-old on a wave runner who never returned home Tuesday night was found after he spent the night clinging to a buoy when the personal watercraft broke down.

Coast Guard spokesman Charles Rowe said Dylan Gowan had left a personal watercraft rental business in New York City for the Highlands in New Jersey when the craft was swamped Tuesday night. He did not have his cell phone with him, and Rowe says Gowan started swimming toward Sandy Hook after dawn.

His disappearance prompted an overnight search after his frantic parents called police. A crew in an NYPD helicopter searched and the Coast Guard was notified, but they were not able to find the watercraft.

During a news conference Wednesday, Rowe said he stayed on the watercraft as long as he could, but when it began to sink, he stripped off his clothes and swam to the buoy. He said he could see search boats looking for him, but he had no way to reach to them.

"The wave runner started to bog down, sounded like it was going to shut off and I just kept running it until it finally shut off on me and started sinking," said Gowan.

When the first light appeared at dawn, he got off the buoy and swam for 25 to 30 minutes before he was able to flag down a Coast Guard boat. "I was honestly scared for my life," said Gowan.

The Coast Guard crew took him to a hospital for treatment of dehydration and hypothermia.

His family got the word about his rescue a short time later -- just before 7 a.m.

"I ran out of the police car and ran into the ambulance, and I just hugged him," his mother said. "It was very good. I was fortunate because in the past two weeks we had two driving scares. Those people never went home to their families. My heart breaks for them, and I'm happy my son came home today."

Dylan Gowan said the experience was terrifying but he knew he had to take action to make it out of the water alive.