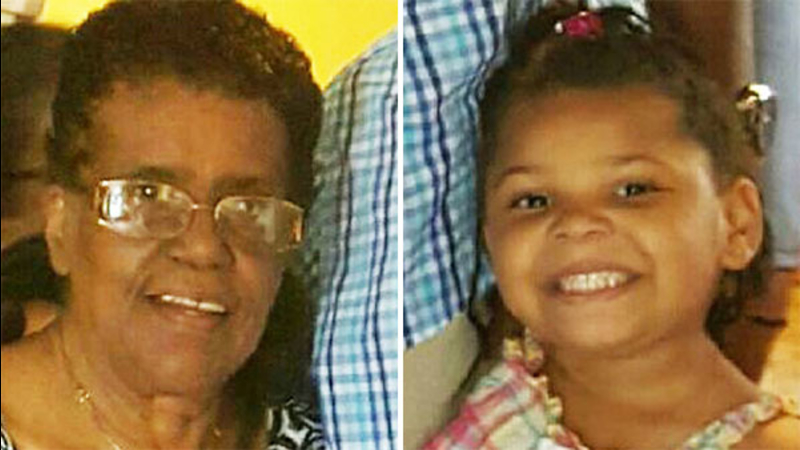 MAYS LANDING, N.J. -- A New Jersey woman and her 5-year-old great-granddaughter have been found alive in secluded woods in rural Virginia, apparently stranded there for days after disappearing on a holiday road trip, authorities said.

Seventy-one-year-old Barbara Briley was unconscious when she was found Wednesday afternoon with her great-granddaughter La'Myra Briley in Dinwiddie County at least a mile from a paved road, Virginia State Police said. The girl was reported to be alert and unhurt.

Police spokeswoman Corinne Geller said in a statement that the two were near their vehicle, stuck on a dirt road on private property, where a man found them. Authorities said it appears the two had snacks and drinks to get by.

The Brileys had been the focus of a multistate search, and police added that no foul play was suspected in the disappearance. The county where the two were is in an area south of Richmond, Virginia's capital.

Barbara Briley was flown by helicopter to VCU Medical Center in Richmond where she was in serious condition, police said. Authorities said the child received a medical evaluation before being reunited with a family member.

The property owner spotted the car from a distance and went to check on it, authorities said. Maj. William Knott of the Dinwiddie County Sheriff's Office said the man had seen news reports about the missing travelers, realized who the Brileys were and called 911.

The Brileys had left New Jersey on Christmas Eve to visit relatives in North Carolina but never arrived. They were last seen Saturday at a gas station in Ruther Glen, Virginia, about 30 miles north of Richmond.

Surveillance video from the gas station shows Barbara Briley walking inside about 5:40 p.m. Saturday. She exits and re-enters before eventually pulling away just after 6 p.m., authorities said.

Gas station clerk Joanna Strange told local media that Briley came inside to say she was lost and she then helped the woman with her GPS before Briley went on her way.

Lt. Travis Nutter of the Caroline County Sheriff's Office, which released the video, said nothing in the footage indicated any kind of suspicious activity at the gas station.

Police said the evidence points to Briley having pulled onto a dirt road, which she then followed a short distance into the woods in Dinwiddie County. There she drove over a small tree and got stuck in a remote area of the property when she tried to back up, according to police.

Family members have said Barbara Briley was a former driver for New Jersey Transit and had made the long trip numerous times. They also said she didn't have any known medical issues.

A relative of Briley's reached by The Associated Press declined comment, and VCU Medical Center didn't immediately return a message.

They used a helicopter and hunted for signs of guard rail damage or other evidence that a car may have run off the road, he said.