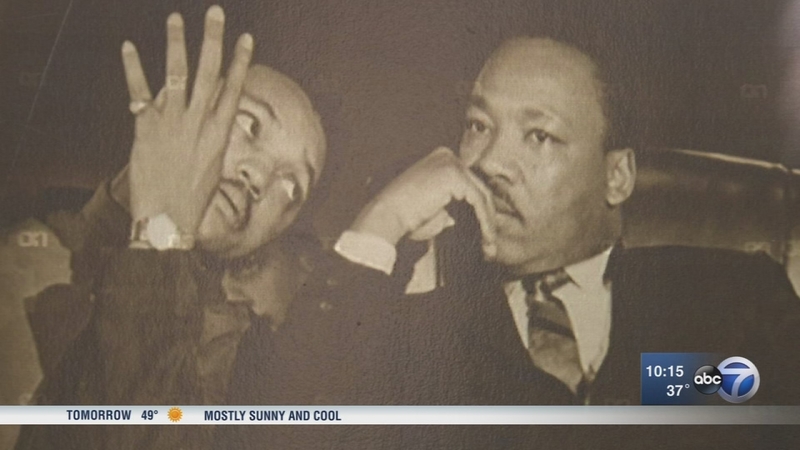 CHICAGO (WLS) -- Ahead of the 50th anniversary of the assassination of Dr. Martin Luther King, Jr., ABC 7 sat down with the man who standing at King's side on that fateful day.

At 76-years old, in his sanctuary at the Rainbow PUSH headquarters, Reverend Jesse Jackson remains a wide-eyed student of the apostle of non-violent resistance: Martin Luther King, Jr., his friend and mentor.

"He is a frame of reference. His resurrection is powerful," Jackson said.

The murder of Martin Luther King, Jr., happened during the tortured spring of 1968 when America was struggling with the Vietnam War and fighting for Civil Rights.

"On this anniversary when you go there, how do you think you are going to feel, you? It always hurts. We were in the middle of a conversation on the way to dinner. He was 39-years-old he was hated by our government, attacked by our government, media, shot, killed in cold blood," Jackson said.

Civil Rights leaders were split on how to move forward following the passage, a few years earlier, of the Civil Rights Act and Voting Rights Act. King and Jackson were called to Atlanta the previous weekend to hash out differences with colleagues on King's anti-war stance. Some felt the position took away from the civil rights fight.

"He came there and said, 'For three days I have been in depression,'" Jackson recalled. "'I have been wrestling with where are we now; so much hostility, so much violence, so much hate in this.' He said, 'I thought maybe I should just quit.'"

Jackson said he saw King transform before his very eyes.

"'But I can't stop,'" he recalled King saying. "'Frederick Douglass and Harriet Tubman they would not accept me going back, they never stopped, so I have to wrassle (sic) with that.'"

To King, war, violence and poverty were inextricably linked. Supporting striking Memphis sanitation workers the next week was a way to make President Lyndon Johnson's "War on Poverty" mean something.

"And those sanitation workers, you know, they too should look forward to watching their children graduate from school, and he had been talking about the virtues of sanitation workers making a decent wage. He just preached himself out of a depression," Jackson said.

A re-energized King, accompanied by Jackson, headed to Memphis, preaching a message that still resonates today.

"His point was we got public accommodation, we got the right to vote, but people are living in trailer camps. And how much have things changed in that regard?," Jackson asked. "Well, 50 years later the poverty base has expanded."

In the dark days at the end of the civil rights movement, shortly before King's assassination, some national pols showed a majority of whites and blacks had a negative opinion of him. And 50 years later, amid the memories that decorate Rainbow PUSH, Jackson said that was inevitable; his leader, after all, upset the status quo following 350 years of slavery and Jim Crow.

And then, the balcony.

"All I can remember is some voice saying, 'One bullet cannot kill a movement.' We must keep going," Jackson recalled. "If your key player is hurt on the field you cannot forfeit the game, you have to internalize your pain and keep marching and keep moving, and we have to be faithful to his charge 50 years later."

Rev. Jackson said the key message of King that is not being listen to today is the need to vote.