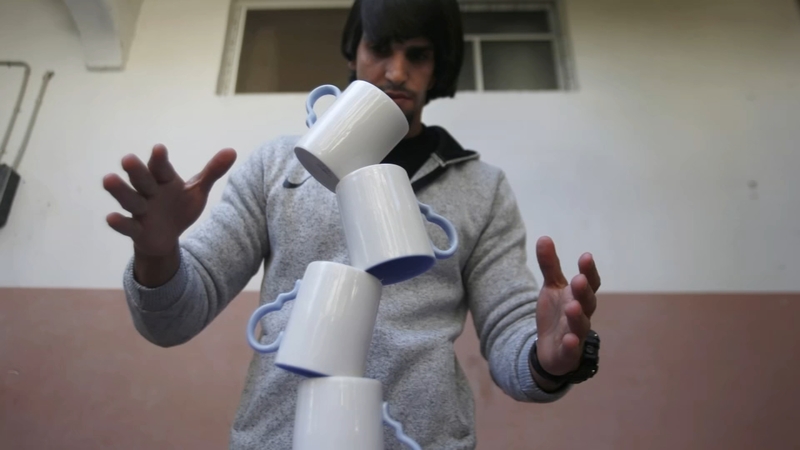 BEIT HANOUN, Gaza Strip -- Whenever Mohammed al-Shenbari sees a new object, he quickly tries to find its "balancing point" and make it stand in a way that appears to defy the law of gravity.

The 24-year-old self-taught Palestinian artist says he can balance almost any object, using what he calls a mix of mind and body.

This has made him a popular entertainer and frequent participant in psychological support sessions that are common in conflict-ridden, poverty-stricken Gaza.

In the yard of his home in northern Gaza, al-Shenbari stood a chair on one leg, propped two gas canisters on a slanted pipe wrench and balanced an upside-down TV screen on the rim of a Coke bottle.

"You just need to know the fulcrum of the object and you get it," he said.

A fitness and bodybuilding coach, al-Shenbari says his healthy lifestyle helped him slowly develop "the great focus" required to balance the objects.

"When I do this, I feel something indescribable; like a magnet drawing out energy from me toward the objects," he said after he stacked four oddly angled cans of beans on a wood frame hanging off a tree.

A year ago, al-Shenbari came across a YouTube video by a Korean balance artist, Nam Seok Byun, and was fascinated by the way the artist arranged layers of rocks delicately supported by round pebbles.

Trying to emulate his hero, al-Shenbari said he would spend days working on what now seem like basic sculptures. Now, it takes him just a few minutes and several attempts to figure things out.

Gaza is sandwiched between Israel and Egypt, which have kept it under a blockade for 12 years since the Hamas militant group took power.

After years of living under the blockade and three devastating wars between Israel and Hamas, al-Shenbari, like many young Gazans, wants to leave the territory in search of better opportunities. His dream is to compete on reality TV shows and travel to Asia, where he says the art of balancing is practiced, to improve his skills.