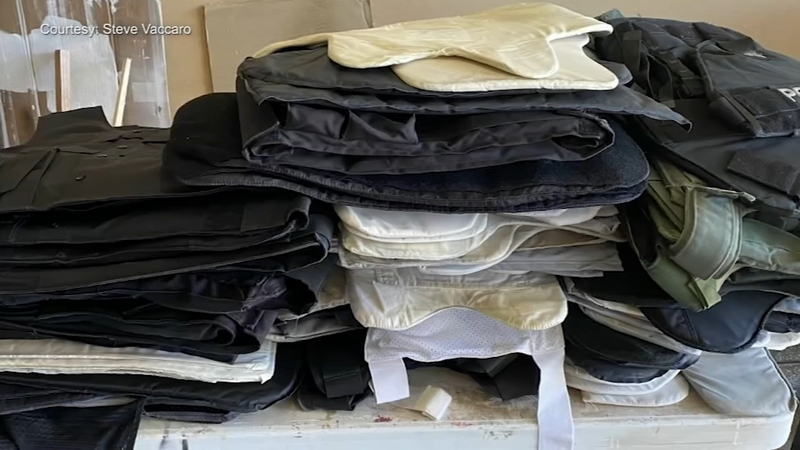 MOKENA, Ill. (WLS) -- A suburban woman is coordinating donations of heavy protective gear from police departments across the suburbs to go to Ukrainians fighting the Russian invasion.

Jennifer Doloski is the mother of three adopted Ukrainian boys and, with Hand of Help in Adoption, her life's work has been to help American couples become parents to Ukrainian children.

Deep in south-central Ukraine, her teenage sons' home of Mykolaiv is under siege, and just hours into the Russian assault it became personal when her boss was shot dead in Kyiv.

"We had one member of our team put out a request to our families, could anyone get them ballistic vests? Protective gear, because they were going out as citizen combatants," she said.

Her first call was to her brother, a retired Mokena police chief, who amplified the request to police departments across the state.

"In about six days we had committed over 300 vests and we've got 90 ballistic helmets that have been committed," Steve Vaccaro said.

But the heavy stacks of protective gear aren't cheap to send, and navigating international shipping to a war zone is clumsy. Vaccaro reached out to a Ukrainian business owner in Frankfort, widening the web of humanitarian help from Chicago's south suburbs.

"They're shipping anything we send them free. It's not costing us a lot to ship from the Chicago area," he explained.

The ballistic gear headed for the war front will protect people Doloski checks on every day.

"I know where they're going, I'm the one that gave the dropping point for them," she said. "And once they get over to Poland they'll be brought over the border to members of our team."

"Police departments have been very, very generous in what they've been giving us," Vaccaro said. "Some nothing more than panels and some can be configured we've been told they're lining vehicles, busses, trucks just so they can protect themselves a little better when trying to evacuate these kids."

The first shipments are on the way, the second will arrive to start guarding Ukrainian civilian soldiers with American police gear any day.