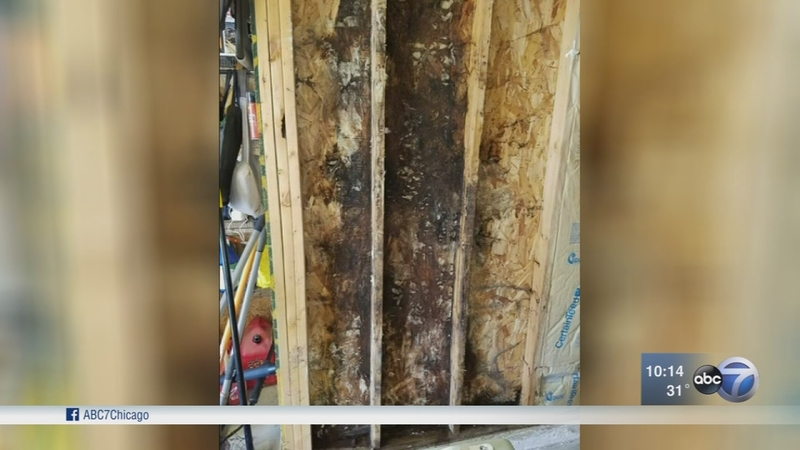 LOCKPORT, Ill. (WLS) -- One homeowner is dealing with a moldy mess in the corners of his basement ceiling. Another discovered major water damage lurking behind a garage wall. The two neighbors have the same developer, but their warranties don't cover the issues.

"This is nine years of damage," Joe Schmidt said.

Schmidt said he recently noticed white marks and water stains in his $400,000 Lockport home, so he removed a large piece of wood.

"So the water's leaking in behind the brick next to the wall and rotting this wall out to the point where I took it off and I stuck my finger through the wall. There's nothing left of this wood," he said. "It's rotted."

Schmidt purchased his home less than 10 years ago from William Ryans Homes. Eric Phillips lives across the street and found mold in two corners of his basement ceiling.

"I paid a sizeable amount, and knowing that you would think that the builder would come forth and say, 'Yes, I apologize,'" Phillips said.

But according to their warranties the builder has no legal responsibility. The 10-year warranties specifically apply to "structural damage," not water damage.

"William Ryan came out and said they weren't going to cover it because it's not considered structural damage," Schmidt said.

"So I'm back to square one trying to figure out how I'm going to get this problem resolved as well," Phillips said.

Phillips said he started inspecting and discovered mold behind his basement walls several years ago when he saw white marks in the same locations, only on the front of his home.

"It goes from that gutter area right where that brick is," he said.

He thinks water is somehow getting in between the walls.

"I had a contractor come out to find out why I was having problems and he clearly stated that your gutters are back pitched, they're wrong," said Phillips.

Even though warranties don't require it, William Ryan Homes said, "Our next step is to reach out to these homeowners to discuss what issues they may be having and schedule an appointment if necessary to inspect the property and assess the issue and identify a potential remediation. We will contact these homeowners promptly."

The homeowners said they have not yet gotten any more visits or inspections from William Ryan Homes since the I-Team brought these issues to the developer's attention in mid-October.