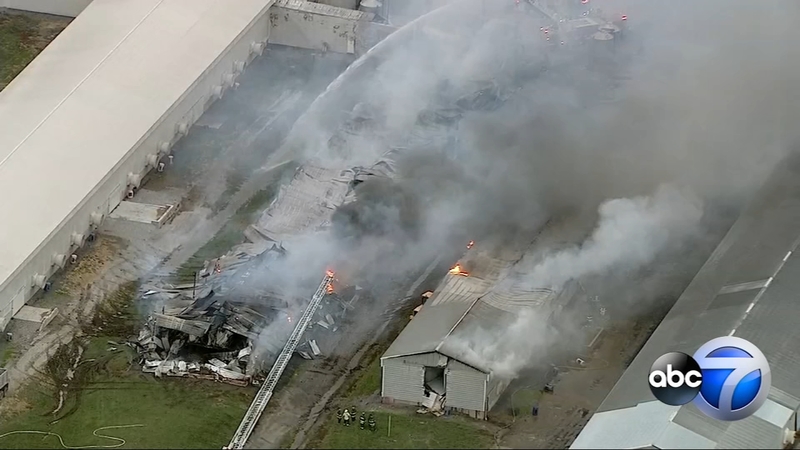 GRANT PARK, Ill. (WLS) -- More than 50,000 hens were killed in a fire at an egg farm in Kankakee County Tuesday morning.

The fire broke out at about 2:30 a.m. at Mussman's Back Acres at 9998 N 16000E Road in Grant Park, Ill. and the fire was raised to a fifth alarm before it was struck out, fire officials said.

Firefighters responded to an extra-alarm fire at an egg farm in Kankakee County Tuesday morning.

Chopper 7HD flew overhead as firefighters poured water onto the farm. The Grant Park Fire Department said five buildings at the plant were damaged, with two receiving heavy fire damage and the other three damaged by heavy smoke. The company said two of the two barns are a total loss.

A spokesperson for the farm, Brian Birch, said the quick actions of the Grant Park Fire Department help to save at least 250,000 to 300,000 hens. No people were hurt.

Michigan-based Konos purchased the farm in 2015. Mussman's serves several Chicagoland retailers. Despite the fire, Birch says Konos will be able to fulfill all of its contracts.

The cause of the fire remains under investigation. Firefighters from a number of south suburban departments responded, including from Orland Park, Palos and Frankfort.

Mussman's Back Acres' website says it is a family-owned farm and they also grow their own feed. The company said there should be no supply interruption.
Report a correction or typo
Related topics:
kankakee countyfirefarming
Copyright © 2021 WLS-TV. All Rights Reserved.
More Videos
From CNN Newsource affiliates
TOP STORIES