More than a dozen skimming devices found in ATMs across city

WLS
By Diane Pathieu and Michelle Gallardo
CHICAGO (WLS) -- Chicago police have issued a new warning after more than a dozen ATM skimming devices have been found across the city.

The skimmers can steal critical personal information. Police said someone attached the devices inside the ATMs and also placed cameras to record PIN numbers as they are entered in some instances.

The alert comes after police said ATM skimmers were found at several Walgreens stores in the Loop.

Chicago police recommend checking the ATM card slot and PIN pad, which should not be loose and to cover your hand when you enter your PIN. Cards should not have any problem or irregularity when placed in the card reader and if there is, do not use the ATM.

In response to the skimming devices found at Walgreens, a spokesperson said in a statement, "Any business that offers an ATM as a convenience to their customers could face this issue. The ATMs in our drugstores are owned and operated by a third party and at our request they will immediately begin to inspect all ATMs in our Chicago locations."

A spokesperson with Citibank, whose ATMs are found inside Walgreens, released a statement saying, "Protecting our customers from fraudulent activity is a critical priority for Citi. Our customers are not liable for any fraud or unauthorized use of their accounts."

Anyone with information about the incidents is asked to call the Chicago Police Financial Crimes Unit at (312) 746-9661,

Expert William Kresse, "Professor Fraud" at Governor's State University, says there are ways to protect yourself.

"Look for a tightness when you place that card in there that might indicate that a skimmer has been placed on that machine. Don't use it if you have any doubts. There are enough ATMs in this town," he said.

Kresse said if the card is hard to put in the slot, it is a warning sign.

"If the card is hard to put in the slot, there could be a skimmer placed internally or if there is something that looks like it is added on, that's an external skimmer. Again, your best bet is to go to a financial institution, they tend to have the later machines that have got the anti-tampering technology built into them," he said.

Kresse said it is best to avoid standalone ATMs, if at all possible.

Many times, scammers need to physically be there to obtain your pin. Make sure you cover your hand when entering your pin and watch for people looking over your shoulder or even recording you. Also, check the ATM keypad for what is known as a plastic overlay that can also record your pin when you touch the keypad. To be extra safe, you should also change your PIN regularly.
Report a correction or typo
Related topics:
chicagoloopstreetervillelincoln parkeast sidelakeviewportage parknorth centergold coastirving parkskimmingatm
Copyright © 2020 WLS-TV. All Rights Reserved.
RELATED 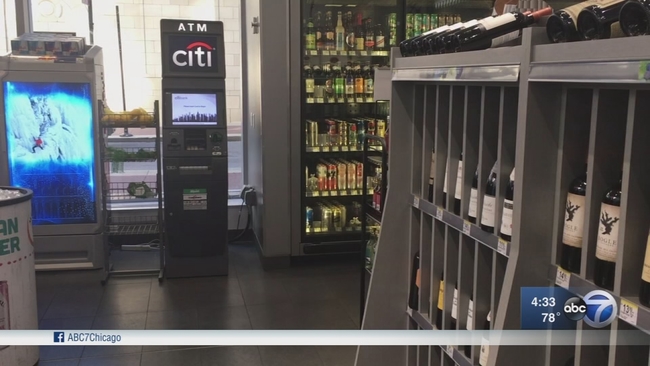