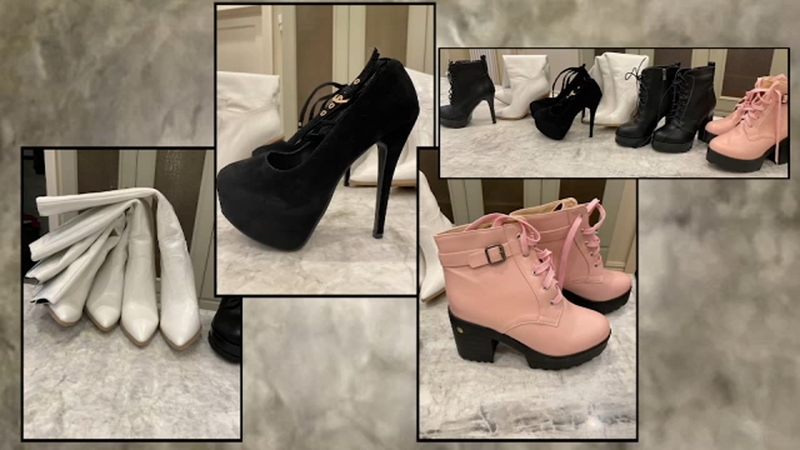 CHICAGO (WLS) -- There's a saying that you can never have too many shoes, but one local woman would disagree after receiving stacks of unwanted shoes.

Shoes and more shoes were being mysteriously mailed to an Oak Park woman.

She couldn't get assistance from any of the parties involved in the strange shipments until the I-Team ran down the source of the shoe problem.

They say, if the shoe fits, wear it.

"They will not bend. You can't walk in them," said Simone Boutet.

So she'll take a pass on wearing them.

Unwanted shoes started showing up on her doorstep last summer, and has received between 15 and 20 pairs of shoes.

"I can't get it to stop and it's really funny because of the shoes themselves, they're just hilariously not my style," she said. "And it just, it doesn't stop. It's absurdity. You know, it's an absurdity."

"Wouldn't it be nice if they shipped size 11 Birkenstocks, maybe I would wear them," Boutet laughed. "I am frustrated with this situation because it keeps repeating itself. It's also just frustrating on a customer service level when you're dealing with giant corporations, that you can't really get the customer service that you need to solve a problem."

Why are these shoes being sent to Boutet's home? Customers are trying to return the footwear to an Amazon vendor out of China. That vendor's return address label says "RETURNS DEPARTMENT" and "Simone" on Elm Street in Chicago, which is also not a shoe return center.

UPS tried to correct the address error and instead sent the shoes to "Simone" in Oak Park.

"I tried to explain this to UPS that if they could just delete this entry altogether," Boutet said.

She even tried returning one box to a UPS store.

"I explained the whole thing to her and she understood it. And so she took them back and then like four days later they came back in the mail to me," she said.

UPS told the I-Team, "... several of these packages' labels were revised and sent to the correct destination... due to a clerical error, some of them were address-corrected to Ms. Boutet."

UPS also said it will contact the seller to put an end to the shoe shipping slip-up.

But what about that address Amazon gives to customers returning shoes? The address with the name, "Simone."

Boutet said she reached out to Amazon but was still left with questions.

"They just didn't have an answer," Boutet said.

So the I-Team contacted Amazon and a spokesperson told us, "... we have been able to address this highly unusual situation. We have reached out to our customer to apologize for this inconvenience involving a company selling on our site and have also asked the shoe seller to make the appropriate corrections on their end."

"My whole front stoop was like boxes and boxes of shoes, and they all have height. A lot of them are really high heels which is very amusing to me," Boutet said.