How do you celebrate Thanksgiving in space? International Space Station hosts astronauts 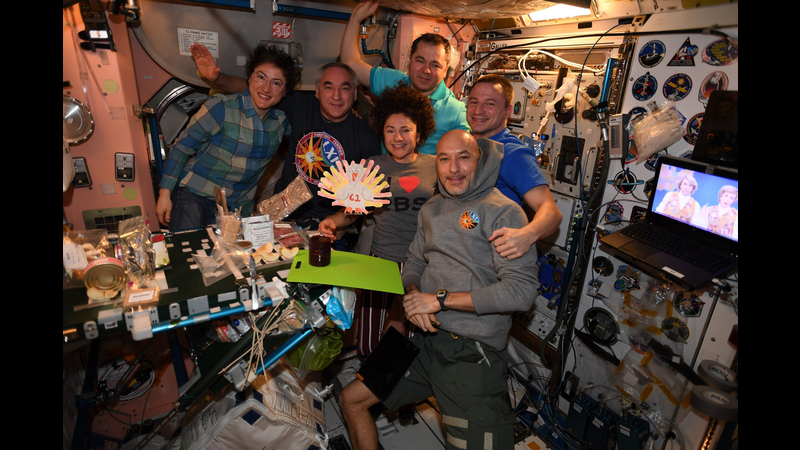 Chicago Thanksgiving Parade to step off down State Street

WASHINGTON -- The holidays still happen in space, they just look a little bit different. But the sentiments are the same.

"I'm going to do whatever I can to show how thankful I am for my crewmates," said NASA astronaut Mark Vande Hei in a NASA video shared from the International Space Station Monday. "It's wonderful having all of these folks up here. We haven't been up here together that long, but wow it sure has been wonderful already."

"We'll be working but looking forward to an awesome meal together," Barron said. "We'll invite our cosmonaut colleagues to join us, so it's a very international Thanksgiving."

The astronauts shared traditions they usually share with their families. Chari said he and his family typically go around the table and have each person say what they are thankful for, so he's going to call in "and do that remotely" this year.

The astronauts usually call home to talk with friends, family and loved ones on holidays spent far from home.

Chari also said while Thanksgiving-themed runs like Turkey Trots happen on Earth, he brought special colored headbands for him and the crew to wear as they run off their holiday meal on the space station's treadmill.

"I just want my family to know how much I appreciate their love and support. Even though I'm going to be really far away and moving really fast, my heart is definitely with them," Vande Hei said.

Holidays away from Earth

Astronauts have marked the tradition of celebrating holidays in space since the days of the Apollo mission, when the Apollo 8 crew famously shared their Christmas Eve message in a live television broadcast in 1968 by taking turns reading from the Book of Genesis in the Bible.

The first Thanksgiving in space was celebrated on November 22, 1973, when Skylab 4 astronauts Gerald P. Carr, Edward G. Gibson and William R. Pogue each ate two meals at dinnertime, although nothing special was on the menu for the occasion. The three worked on and supported a spacewalk lasting six hours and 33 minutes earlier in the day and missed lunch.

In addition to shrimp cocktail, irradiated turkey and cranberry sauce, Neri Vela famously brought tortillas to space. Unlike bread, which crumbles easily, tortillas are a perfect addition to the space menu, and they are an astronaut favorite to this day. Recently, tortillas were the perfect vehicle for space tacos made using the first chile peppers grown in space.

The first Thanksgiving on the space station took place on November 23, 2000, just three weeks after the trio of NASA astronaut William M. Shepherd and Russian cosmonauts Yuri P. Gidzenko and Sergei K. Krikalev arrived. The festive meal kicked off a celebration that has taken place on the station every November since.

RELATED | How to cook turkey: Recipes, cooking times for Thanksgiving from Butterball

The 12 crew members represented the United States, Russia, Belgium and Canada, and they celebrated together two days early since the shuttle departed the space station on Thanksgiving itself.

How to host a Thanksgiving dinner in space

How these holidays are marked and celebrated is up to each individual crew, and space veterans tend to share suggestions and ideas with rookies before they go up, NASA astronaut Dr. Andrew Morgan told CNN in 2020.

Morgan spent the entirety of the holiday season on the space station in 2019 alongside crewmates Jessica Meir, Christina Koch, Alexander Skvortsov, Oleg Skripochka and Luca Parmitano.

It was a busy time on the space station with multiple spacewalks and experiments on the schedule, but the astronauts were able to come together for a special meal that weekend with their international crew members and talk about what Thanksgiving meant to them.

Turkey, stuffing and mashed potatoes are on the standard menu for NASA astronauts in space, but they also saved special treats like smoked salmon and cranberry sauce to share with each other. In space, the cranberry sauce perfectly retains the shape of the can it came in. Meir and Koch also made hand turkeys for their table decor.

For NASA astronaut Mike Hopkins, it was his second Thanksgiving in space after spending the holiday on the station in 2013.

"For me, Thanksgiving is all about family," Hopkins said. "This year, I'm spending it with my international family. We all feel very blessed to be up here and we're very grateful for everything we have."