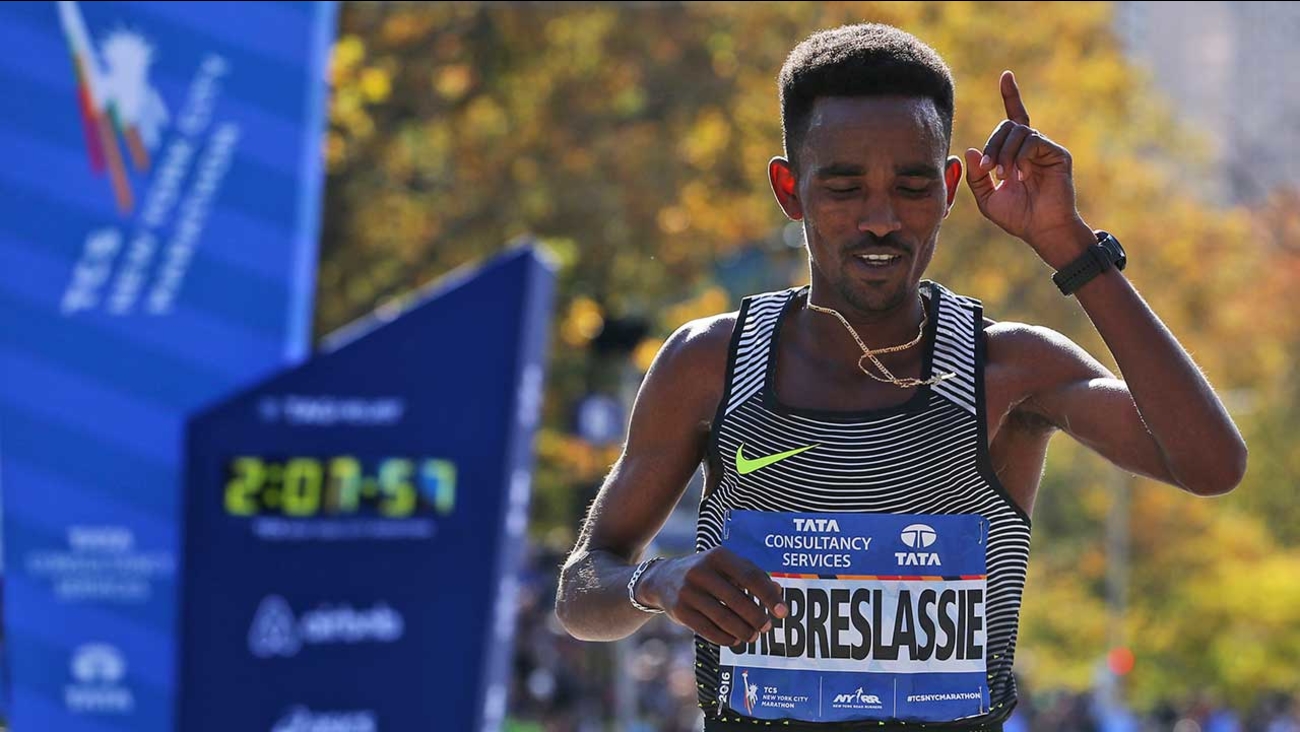 Ghirmay Ghebreslassie, of Eritrea, reacts as he crosses the finish line first in the men's division of the 2016 New York City Marathon in New York, Sunday, Nov. 6, 2016. (AP Photo/Seth Wenig)

Ghirmay Ghebreslassie, 20, from Eritrea finished the five-borough race in 2 hours, 7 minutes and 51 seconds, qualifying him as the third fastest runner in the marathon's 46-year history.

"Nobody has won any major marathon from Eritrea," Ghebreslassie said at the New York City Marathon Press Conference. "I'm really proud of it."

Mary Keitany, 34, of Kenya finished first in the woman's division, clocking in at 2 hours 24 minutes 26 seconds. It is her third consecutive victory at the United States' largest marathon.

Previously, the youngest male winners of the marathon were Americans Alberto Salazar in 1980, Tom Fleming in 1973, and Sheldon Karlin in 1972, who all won first place at age 22. Beth Bonner, also an American, is still the marathon's youngest winner, placing first in 1971 at age 19.

Ghebreslassie finished 62 seconds faster than second-place winner Lucas Rotich, 26, of Kenya. Ghebreslassie and Rotich were helping each other along the way until Ghebreslassie began to break away at mile 16.

"Today was his," Rotich said at a press conference after the event. "He was stronger than me."

This is not the first time Ghebreslassie has broken records as a young athlete. In 2015, he became the youngest winner of a road event at the International Association of Athletics Federations World Championships, according to IIAF's website.

Ghebreslassie said the wind was the toughest part of Sunday's race, but said confidence was the only way to overcome that obstacle.

The marathon's oldest winners are Miki Gorman of the United States who won in 1977, and Priscilla Welch of Great Britain, who won in 1987. Both were 42 years old at the time of their victories.

Abdirahman moved to third place right before the 36K.

"I didn't think I was going to finish third," Abdirahman said at the press conference. "I thought I might finish fifth, sixth or seventh."

Abdirahman made the New York City Marathon his goal after suffering an injury that made him unable to compete at the Olympic trials. He told his manager he would treat this marathon as his own Olympic trials.

"Age is just a number to me," Abdirahman said at the press conference. "I kind of look at it as an advantage because I knew the course and I've run it and I've been around a long time."
Related topics:
marathonsu.s. & world
TOP STORIES
'Simeon curse': JV football player killed in South Side shooting
Search resumes for Brian Laundrie in Gabby Petito case
ISU grad student missing for nearly a month
Naperville North HS cancels school day due to threat
IL reports 3,561 COVID cases, 39 deaths
Gabby Petito saga shines spotlight on other missing persons cases
'They are scared:' Therapist offers free sessions to kids
Show More
TIMELINE: What happened to Gabby Petito?
Why isn't there an arrest warrant for Laundrie? Legal analyst explains
Justin Fields to make first start at QB for Bears against Browns
Waves up to 18 feet possible in Lake Michigan Wednesday
Guinness to open brewery, taproom in West Loop
More TOP STORIES News