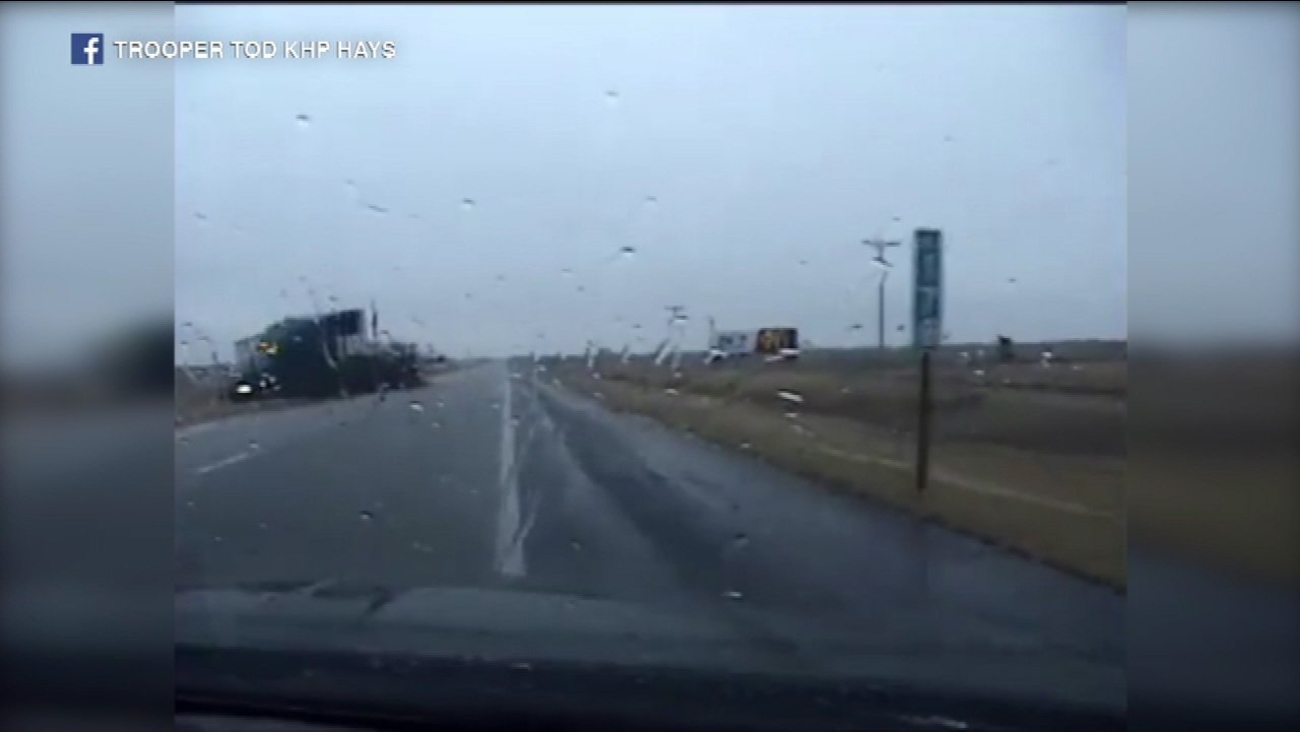 Video from the dashcam of a Kansas state trooper showed a truck lose control and slide into oncoming traffic over the weekend during an ice storm.

The trooper was driving east on I-70 in Russel County when he had to pull off the road to avoid being hit. No one was hurt.

The accident came as a third wave of sleet and drizzle glazed swaths of the central U.S. on Sunday.acknowledging fell short of dire forecasts.

The freeze made roads harrowing. In Kansas near Kansas City, two troopers escaped injury when their vehicles were struck while working a crash along northbound Interstate 635. And in central Nebraska, authorities believe icy conditions contributed to a fiery crash involving two tractor-trailers shortly before 9 a.m. Sunday on Interstate 80, forcing a three-hour closure of 15 miles of Interstate 80. There were no injuries.

Authorities say ice contributed to a southwestern Kansas wreck Saturday night that killed a 35-year-old Oklahoma man and injured several others. The Kansas Highway Patrol said Thay Torres-Ocacio of Guymon, Oklahoma, died after the sport utility vehicle in which he was riding went out of control on an overpass and eventually overturned several times.

Some people lost power amid the storm. Nearly 11,000 electric customers were without power in Oklahoma, nearly all in northwestern part of the state. Woodward County Emergency Management Director Matt Lehenbauer said Sunday that the county was likely the hardest hit. He said that as some power is restored, the ice that's bent tree limbs begins to melt and the limbs snap back into place, sometimes knocking down additional power lines.

South of Kansas City, the latest round of storms dumped three-quarters of an inch of precipitation overnight, resulting in about one-quarter of an inch of ice.

Jared Leighton, a National Weather Service meteorologist near Kansas City, Missouri, said Sunday that while the breadth of the ice accumulations fell short of expectations, "that shouldn't distract from the impact of the storm."

"The amounts were never really the story; the impacts were," Leighton told The Associated Press. "The roads are still a mess, and the Highway Patrol is having their vehicles run into."

Becky Allmeroth, a state maintenance engineer for the Missouri Department of Transportation, said ice is "the most difficult storm to fight."

"We are keeping up with the changing conditions, but it is a continual battle," she said of the department's around-the-clock scrambling to treat the glazed roads. "The precipitation is coming in waves, and we have to apply more salt."

Many residents had prepared for the storms by stocking up on bread, milk and other necessities and by buying flashlights and generators to have on hand in case power gets knocked out.

The storm prompted the NFL to move the AFC divisional playoff game in Kansas City between the Chiefs and the Pittsburgh Steelers to Sunday evening to allow more time to treat roads and parking lots at Arrowhead Stadium. The game was scheduled to kick off at noon but now will start at 7:20 p.m.