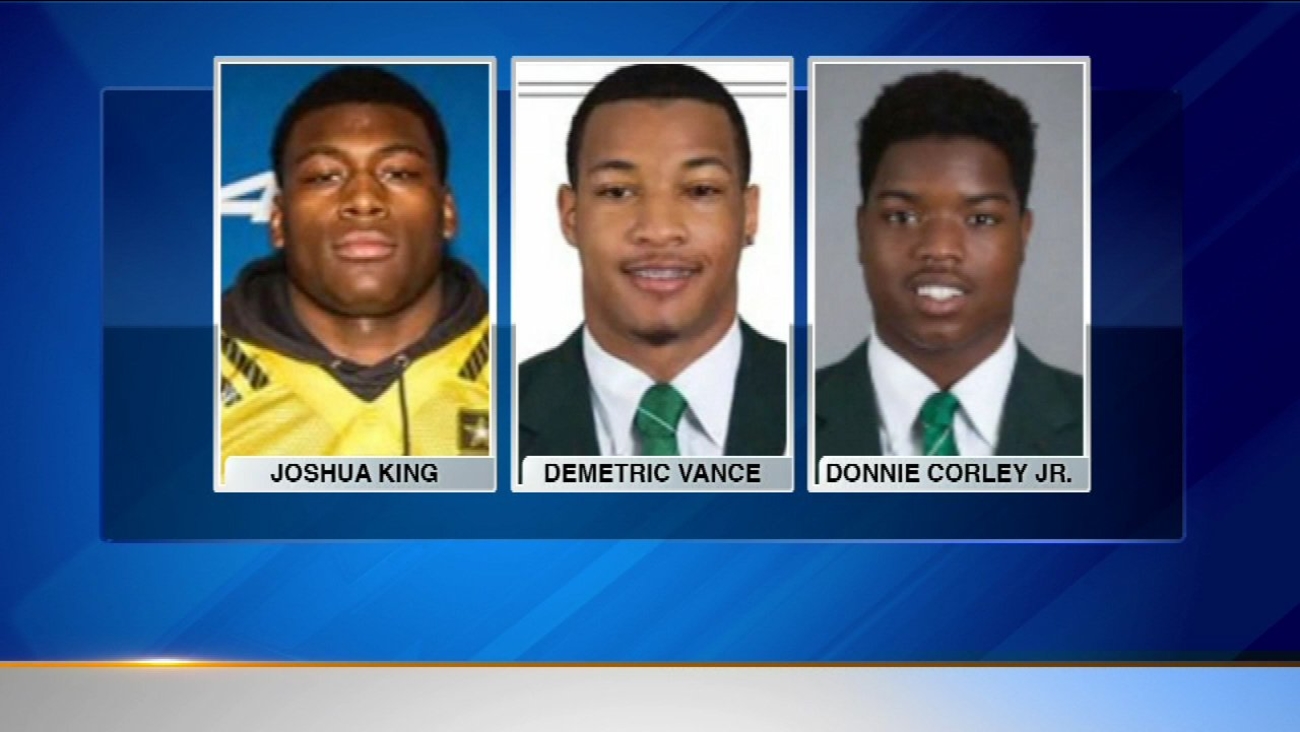 EAST LANSING, Mich. -- Three Michigan State football players, including one from Darien, Ill., were charged Tuesday with criminal sexual conduct after a woman said she was raped and forced to perform oral sex in the bathroom of an on-campus apartment during a party in January.

Coach Mark Dantonio dismissed all three from the football program moments after the charges were made public and he joined athletic director Mark Hollis for a news conference a few hours later.

"This is my home," Hollis said, choking up a bit as he spoke. "It's where my wife and I attended school - where one son and my daughter earned their degree, where my other son will enroll this fall. I expect my home to be safe - safe to all that live here and safe to all that visit. Like any home, its safety requires shared responsibility and accountability. As athletic director, I am responsible to make tomorrow better than today."

King is a defensive end from Darien, Illinois. Vance, a defensive back, and Corley, a receiver, are both from Detroit.

"It's never a good day when a criminal charge is filed against you, but at least Mr. Corley knows what he is facing and can get on with the process of fighting it," said Corley's attorney, John Shea. "He maintains that, in fact, he is innocent, and we intend to demonstrate that in the coming proceedings."

Prosecutor Carol Siemon had said three people were being charged in the incident, but their names were not disclosed until Tuesday in court when university police Detective Chad Davis described the allegations for District Judge Richard D. Ball in in East Lansing.

Corley and Vance initially denied having any sexual contact with anyone while at the party, police said, but later said they'd received oral sex from a woman in the bathroom. They both said they did not know the woman's name, and both identified the accuser in a photograph, Davis said.

Karen Truszkowski, an attorney for the accuser, asked for privacy.

"This is not about football, and it's not about this university," she said. "It's about four people that - this is dramatic and difficult for all of them. So that's what I want people to keep in mind."

Michigan State announced Feb. 9 that three players were suspended as part of a sexual assault investigation, but the school had not identified who they were until Tuesday. The lingering investigation - as well as a separate criminal sexual conduct charge in April against Michigan State football player Auston Robertson - have loomed over the athletic department. Robertson was dismissed from the team following the charge against him.

The problems in the football program come at a time when the school is also dealing with the fallout from allegations of sexual assault against Larry Nassar, a former MSU doctor who also worked for USA Gymnastics.

On Monday, Michigan State released a report from an external law firm that investigated the football program's handling of the sexual assault allegations against its players. The investigation found no evidence that Dantonio violated the school's policy on relationship violence and sexual misconduct. The report said Dantonio "took prompt and decisive action" with respect to the January incident.

The allegations at Michigan State have come after football programs at Baylor and Minnesota have been rocked by sexual assault allegations.

"Look how many arrests we have had for sexual assaults with football players," Truszkowski said. "There's a whole lot more out there. Is there a problem? You do the math, I guess."
Report a correction or typo
Related topics:
michigandariensex assaultcollege football
Copyright © 2021 by The Associated Press. All Rights Reserved.
More Videos
From CNN Newsource affiliates
TOP STORIES