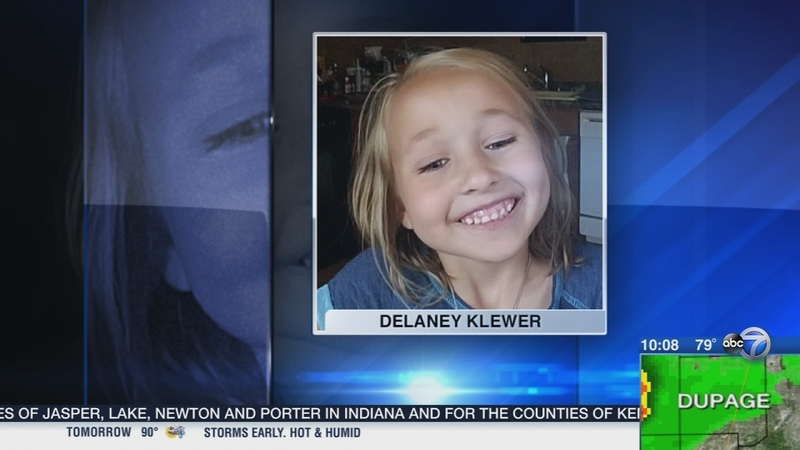 MICHIGAN CITY, Ind. (WLS) -- Michigan City police are searching for a driver who hit a 5-year-old girl and left her dying in the street.

Delaney Klewer was trying to cross Broadway Street Tuesday evening with her 8-year-old sister, about a block away from their home, when she was fatally struck. A small cross with stuffed animals marked the spot Wednesday.

Officers responded around 5:50 p.m. Tuesday to a report of a pedestrian hit by a vehicle in the 300-block of Broadway Street, across the street from a park frequented by children.

The first officer on the scene was Long Beach police officer Jason Yagelski. He found the child and administered CPR. LaPorte County paramedics rushed her to St. Anthony Hospital, where she died.

Yagelski returned to the scene of the hit-and-run Wednesday evening and paid his respects at the makeshift memorial. He laid flowers and said a prayer for Delaney, who would have turned six on Saturday.

"She'd have me lay on the couch with her to watch movies, and her bright blue eyes and eyelashes for days," remembered her mother, Gail Biela.

Klewer's family said she went back to a neighborhood park with her Sara to get her flip flops, which she had left there late Tuesday afternoon. As they were trying to cross Broadway Street, Delaney was struck by a car and Sara ran home to get help.

"When I asked her what happened, she said she tried to stop Delaney and Delaney didn't see the car," Biela said.

With the permission of her parents, Sara shared what she did right after her sister was hit.

Investigators said the SUV was heading west on Broadway when it hit Delaney. The driver never stopped.

"I feel like I have been run over by a car. That's how I feel, just hollow inside," said Matthew Klewer, father.

Police released a surveillance photo of a vehicle that may have been involved in the hit-and-run. The surveillance video was recorded at a nearby factory. Police was originally described as a black or dark gray SUV that may have had a spare tire mounted on the back. The photo shows a silver or gray SUV.

"I don't understand how someone can snuff out a light so bright, so young, and not even have the common courtesy to stop to see if she is okay," Klewer said.

After returning from the hospital Tuesday night, Delaney's father came to the crash site to say his goodbyes.

"I parked the truck in the road, threw on the flashers, and I sat where her body laid and talked with my baby," he said.

"We're confident that the person who hit little Delany did not do this intentionally. This was an accident. We're urging the person who was the driver of that vehicle to come forward as soon as possible," said Lt. Jeff Loniewski, Michigan City Police.

Residents of the northwest Indiana neighborhood said their community is tight-knit, so people will be looking out for the SUV.

"We already talked to our neighbors on both sides of us. We're gonna keep our eyes open," said Jason Barishman, a neighbor.