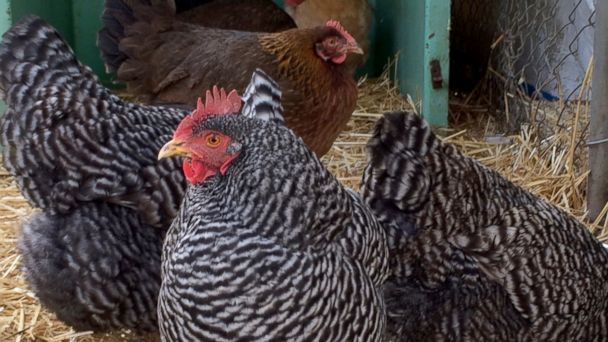 An Oregon police department and local animal shelter came to the rescue after an "angry" man left seven chickens in the most unexpected place -- the office of the Oregon Department of Revenue, police said.

A man, described by the Eugene Police Department as "angry" at the Department of Revenue, dropped off seven chickens in the office Wednesday afternoon, police said. A Eugene police officer and animal welfare officer then came to the scene and rounded up the chickens, police said.

"Chicken wrangling is not a required skill for police officers," the police department said in a statement.

The man alleged to have left the chickens was 66-year-old Louis John Adler, police said. Adler was not charged, but was given a notice saying he was being "trespassed from the location," police said, meaning he was escorted off the property and would be charged with trespassing if he returned.

Police said they could not release why he was allegedly mad at the Department of Revenue.

Adler and the Department of Revenue could not be immediately reached by ABC News for comment.

The chickens were then taken to the 1st Avenue Shelter in Eugene, police said.

Cary Lieberman, executive director of the Greenhill Humane Society, which operates the 1st Avenue Shelter, told ABC News today that the chickens have been in his shelter's care since Wednesday.

Police told the shelter on Thursday that the chickens wouldn't be returned to their owner, Lieberman told ABC News, so the shelter is making them available for adoption.

"We are looking for a home experienced with chickens and who will keep them as egg-layers and companions rather than send them straight to the pot," Lieberman said. "We are closed today for Christmas, but our staff and volunteers will be at the shelter to care for the chickens as well as the dogs and cats."

The shelter reopens Saturday morning, he said, when the chickens will be available for adoption for $15 each.