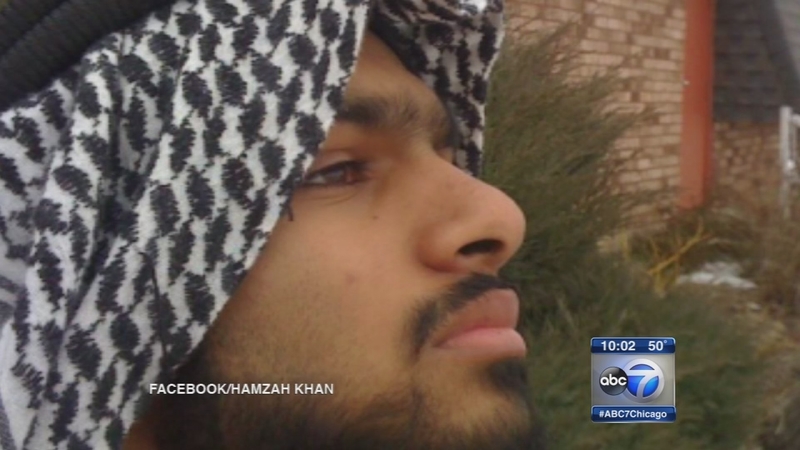 According to the U.S. Attorney's Office, he was attempting to join ISIS.

That teenage suspect attended a mosque around the corner from his home here, and members say they had no idea what he allegedly was up to.

At the Bolingbrook mosque where Khan was a member, worshippers describe a quiet, cordial young man who taught Arabic at the mosque.

"He would never get angry. Really nice guy. He was a teacher here, so nobody was expecting this," mosque member Ali Idrees said.

His mother wept during the hearing. She and her husband said nothing as they left and as they returned home.

Their Bolingbrook neighbors are stunned.

Prosecutors say Khan was arrested Saturday at O'Hare as he tried to board a flight to Turkey with a $4,000 round-trip ticket that was bought for him.

At that moment, the FBI was searching the home he shared with his family, where they found maps, drawings and according to court papers, a three-page handwritten note from Khan to his parents saying was traveling overseas because, "there is an obligation to migrate to the Islamic State now that it has been established."

Khan also allegedly wrote that he didn't want his tax dollars used to kill his "Muslim brothers and sisters."

"They were ready at the very moment they got him at the airport," said ABC7 legal analyst Gil Soffer. "They were executing the search warrant at his house, so this is obviously the product of an investigation that was ongoing."

The FBI says Khan has acknowledged making contact with someone online, who arranged for him to meet ISIS representatives once he landed, but prosecutors aren't saying how agents were tipped off.

"My guess is that they had obtained information about him from other people and other sources," Soffer said.

Neighbors say Khan graduated from the Furqaan Academy, an Islamic school across the street from his house. No one from the school has returned ABC7's phone calls. The Muslim Association of Bolingbrook, which runs the mosque Khan attended, said it will cooperate fully with authorities.