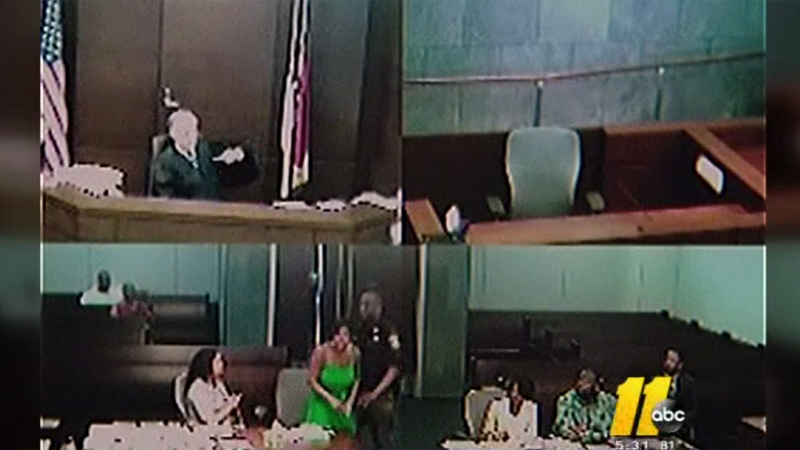 DURHAM, N.C. -- Family court cases can be very emotional, but few rise to the level of a recent hearing in Durham, North Carolina.

A couple fighting over custody of their son found themselves on the receiving end of a judge's anger.

"I'm going to choose my words very carefully," said District Court Judge James Hill in a courtroom video recording obtained by ABC11. "Two parents can come in and act like such idiots!"

Hill continued to blast Rishawna Morrison and her husband about their three-year-old son caught in the middle of their bitter divorce battle.

"It was almost as if we weren't sitting in the same trial," recalled Rishawna Morrison. "As I watched him and I listened to him, I felt like in that moment -- for whatever reason -- he was using his position to push some personal agenda."

Morrison says she was confident headed into a one-day custody trial that ultimately lasted three days. Hill listened to multiple witnesses and Morrison's claims of infidelity, neglect, assault and check fraud against her husband.

Then he reprimanded both of them. Hill accused the young mother of withholding her son's whereabouts. She denies that yet admits the judge's comments and stress set her off.

Morrison was warned multiple times not to speak. They tried to arrest her, but she resisted. She ran away from the deputy. Eventually, more deputies were called in to restrain Morrison, her mother and brother. Courtroom video shows her brother pushing an officer down, causing him to draw his weapon in court as the judge headed for the exit. Morrison would serve a month in jail for civil contempt.

Morrison says she spent her birthday in jail and penned an apology letter to the judge in hopes of an early release. She says she does not regret her courtroom outburst.

"I would go to the ends of the earth for that little boy. So in that moment, what people see is a reaction from a series of events that had taken place for months," she explained.

Morrison says the judge overlooked court records she filed showing her husband's lack of financial support and alleged death threats from him and his new live-in girlfriend. She says she feared for her son who's now expected to visit the place he once called home.

"As a mother, I would not have felt good about myself had I walked out of that courtroom knowing that my child was being placed in a dangerous situation," Morrison said. "I don't think later on in life I could've explained to my son that I had an opportunity to protect you and I failed you."

"Neither my client nor I have any comment regarding this case," wrote Woodrena Baker Harrell. "The matter is still pending and it needs to be addressed in the proper forum which is the court."

According to another court official speaking on his behalf, Judge Hill declined to comment.

Morrison plans to file a complaint with the Judicial Standards Commission based on the Judicial Code of Conduct that says a judge should maintain order and decorum, as well as, be patient, dignified and courteous.

Judicial Standards complaints are kept confidential. A spokesperson for the commission would neither confirm nor deny a complaint filed by another party is already pending.

Either way, Morrison says she's standing up and speaking out again. This time, for other parents.

While Morrison was booked at the Durham County jail, the judge continued with the custody hearing. Her husband was granted sole custody of their son pending her release from jail. Morrison and her husband now have a joint custody agreement set to be finalized during a court hearing on Wednesday.

Morrison is no longer facing resisting an officer charges. However, criminal charges against her mother and brother are pending.

Morrison's husband is charged with misdemeanor assault on female stemming from a domestic dispute last year.