WLS
CHICAGO (WLS) -- A federal judge has ruled a west suburban Chicago terrorism suspect mentally unfit to stand trial on charges he placed what he believed to be a bomb outside a bar.

U.S. District Judge Sharon Johnson Coleman said at a Thursday hearing that she has concluded 22-year-old Adel Daoud is sincere in his belief that aliens, the Illuminati and Freemasons are conspiring against him.

Agents arrested Daoud in a 2012 sting after he placed what he believed to be the explosive device outside a Chicago bar. He also is charged with attacking an inmate who allegedly taunted him with a Prophet Muhammad drawing.

Daoud's attorney, Thomas Durkin, has said it's impossible to defend someone who believes his attorneys are part of an Illuminati conspiracy.

Daoud sent the I-Team a new letter asserting his belief the government is composed of aliens.

Daoud's attorneys argue such statements prove the Hillside native should be found unfit for trial.

Daoud's letter arrived with a Shirley Temple stamp at ABC7 Eyewitness News. The half-page typewritten letter mirrors statements that Daoud made last week in court during a two-day competency hearing, including claims that the government is composed of "alien reptiles from another planet who worship the devil."

The hearing was aimed at determining whether the terror suspect is able to comprehend the charges against him and can assist in his own defense.

"At this point in time today, in August of 2016, he simply is not competent to stand trial," said Durkin.

Defense attorneys say Daoud suffers from a delusional disorder, which worsened in recent months, especially after one of his cellmates at the MCC committed suicide in January.
"I think the argument is that he has seriously deteriorated since he's been in custody. That that deterioration has been since he's been housing that special housing unit, or the 'shu,' isolation, whatever you want to call it," Durkin said.

Daoud called the ABC7 I-Team from jail in July.

"I have an announcement. I want to endorse Donald Trump for president. I like him, he's outspoken. He says whatever the hell he wants and he will admit that this country is at war against Islam. He's a very entertaining speaker. Don't you just think anytime Donald Trump gives a speech you'd be a lot more excited to hear what he is talking about than Hillary Clinton? I mean, come on man," Daoud said on that call.

The government's psychologist says Daoud is competent to face trial and that the accused terrorist has extraordinary beliefs, but that that doesn't make him paranoid or delusional. 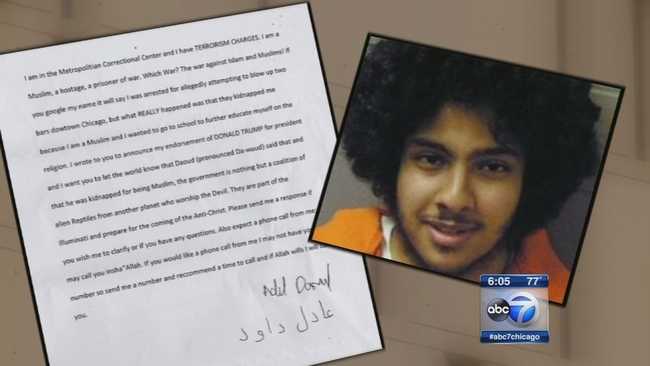