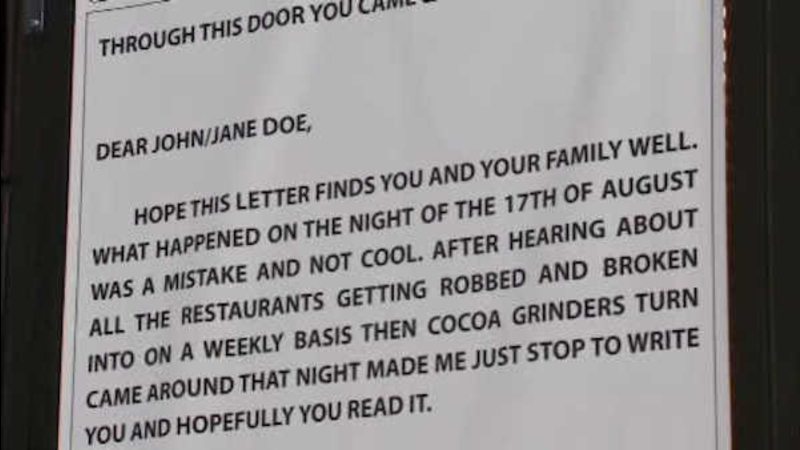 BAY RIDGE, Brooklyn -- His Brooklyn coffee shop was broken into, thousands of dollars stolen, but the owner turns the other cheek.

Instead of calling police, he sends a message to the thief.

He posted a letter of forgiveness outside his cafe, a letter he hopes the robber will see.

It's a simple sign outside a Bay Ridge cafe.

No neon lights or flashing words. But it's getting a lot of attention, both on the street and on social media.

What's getting so many to stop and notice it? The message, written by the cafe's owner Abdul Elenani.

"It's my religion. It's the way I was raised up. Is to always forgive and always to give," he said.

But that message of forgiveness alone isn't what's grabbing people's attention. It's who it's addressed to.

You see, this is a note to the burglar or burglars who broke into the Cocoa Grinder last week, stealing the entire cashier drawer with $3,000 in it.

The sign reads in part... "I didn't report this, and I didn't check the cameras to see who you are. I'd rather just not know. If the money you stole was to better you and your family's living, then I forgive you. If it was stolen for you to go out there and ruin yourself and health, I still forgive you and ask of you to fix yourself."

Elenani says there had been a string of burglaries in this neighborhood just before his store got hit.

That's why he believes whoever is behind this is from here.

So he put this sign outside the store thinking this way he or she or they would see it.

"It's definitely unusual. I dunno I like the fact that he's humble and he's forgiving," said an employee, Samantha Gorovets.

"It brings the community together," said employee Cindy Sung. ("You think you would've done that?") "Probably not," she laughed.

As for all the buzz this simple sign is getting on social media, Elenani says it's completely unexpected.

"I got six marriage proposals through Facebook!", he said, laughing.

Asked what he would do if the burglar or burglars fessed up, he says he would give them a job.
Related topics:
bay ridgenew york citynew yorkburglarytheftbrooklyn newsu.s. & worldcoffee
Copyright © 2021 WABC-TV. All Rights Reserved.
More Videos
From CNN Newsource affiliates
TOP STORIES