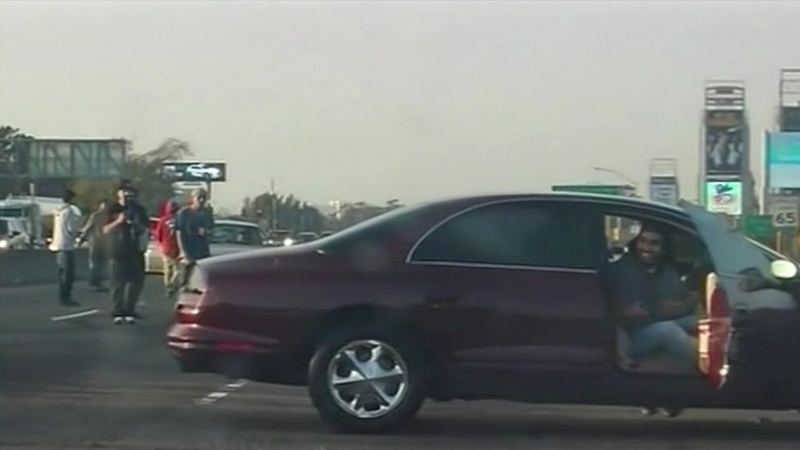 OAKLAND, Calif. -- The CHP says it has zero tolerance for sideshow drivers like the ones who did donuts on Interstate 880 near the Hegenberger Expressway on a busy Sunday afternoon.

According to Officer Sean Wilkenfeld, the CHP responded to reports from callers around 4 p.m. that multiple vehicles were spinning doughnuts and had stopped traffic in the northbound lanes of the freeway. It was a dangerous event that shut down I-880 for about 10 minutes.

"We sent some officers down there," Wilkenfeld said. "One of the officers was responding on the southbound side. He was reporting that he was getting struck by rocks in his patrol car."

The CHP officer went on to say, "Sideshows are frustrating. They are illegal. Maybe they were trying to deter us from responding, but obviously that's not gonna work. Throwing rocks at a patrol car isn't going to keep us from responding. We're still gonna take action and break it up."

The sideshow was captured on video and then posted to YouTube by Thomas Imbro. And it turns out he wasn't the only one recording the event. CHP officers say the drivers doing the donuts on I-880 and stopping traffic were also rolling video.


Tap to view if on News app

"In this instance, we actually did receive information from one of the parties that we did contact that they were trying to film a rap video on the freeway," said Wilkenfeld. "So that may have been the truth, we're not sure, but they did have video cameras as is the case in most of these instances."

There were no arrests, but a 19-year-old man from Hayward was cited at the scene for reckless driving and his red Mustang GT was impounded for 30 days.

ABC7 News found it Monday at an Oakland tow yard. Stickers on the windows claim allegiance to the Savage Habits Car Club. The motto: "Anytime anywhere."

A documentary posted on YouTube by the club shows various street races and sideshows in Oakland and elsewhere.


Tap to view if on News app

The CHP does have a process for film crews to apply for a permit to shoot a film or video on a freeway. That was not done in this case.

The CHP says drivers who get stuck in this traffic get very upset.

"We had a Facebook post in this and already overnight we've had a lot of comments and support to break up these sideshows," Wilkenfeld said. "Because the people who are stuck on the freeway are just trying to mind their own business, maybe they're trying to get to work or maybe they're trying to run errands, and these sideshows close down a major freeway and that's just not acceptable."