Chicago to remain a sanctuary city for immigrants, Emanuel says 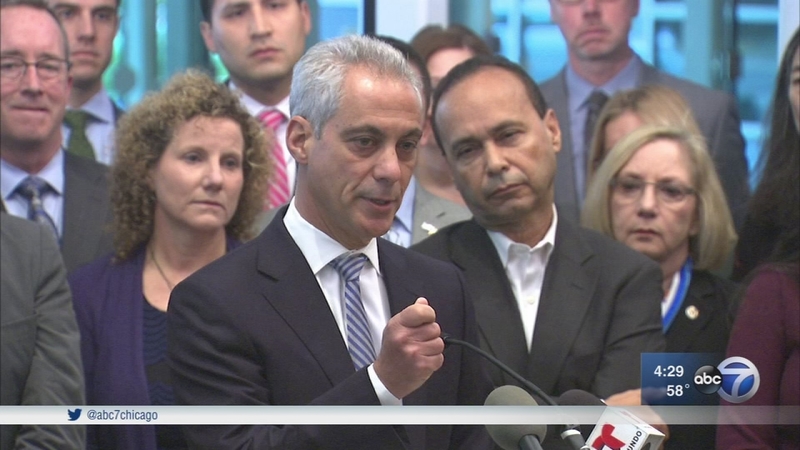 Emanuel: Chicago to remain a sanctuary city for immigrants

CHICAGO (WLS) -- Mayor Rahm Emanuel reassured the city's immigrants that Chicago is and will remain a sanctuary city as president-elect Donald Trump said he will deport millions of people who have criminal records and are in this country illegally.

"You are safe in Chicago. You are secure in Chicago and you are supported in Chicago," Emanuel said.

The mayor tried to reassure Chicago's undocumented immigrants that despite the incoming Trump administration, their access to city services - including public schools - will not be affected.

"You are always welcome in this city. Always," Emanuel said.

By ordinance, Chicago police and public agencies who come in contact with undocumented residents are instructed not to contact immigration authorities.

During his campaign, Trump said, if elected, he could suspend federal aid to "sanctuary cities" like Chicago if they do not report illegals.

"Some can't get up in the morning. They feel hopeless and scared, uncertain of the road ahead," said Tanya Cabrera, Illinois Dream Fund.

"Fifty-two percent of black Americans, black men, are unemployed in Chicago. It would be to deport these people and hire some black men," Butler said.

"We are here together as a community. Republican and Democrat, but first, as American to defend our immigrant tradition," said Rep. Luis Gutierrez, D-Chicago.

Alderman Raymond Lopez (15th Ward) said if the Trump administration stops aid to programs that include undocumented immigrants in Chicago, he would support local tax increases to make up the losses.

"We are committed to being welcoming to all of those who come to our city. Even to the point of raising taxes, again? You know what, sometimes we have a moral obligation to take care of those who are less fortunate," said Ald. Lopez.

Emanuel said operators for Chicago's 311 information line have been trained to assist anyone with concerns. He also asked residents to check in with friends, neighbors and others facing anxiety about this election.

At the White House Monday afternoon, President Obama urged the president-elect not to deport the "dreamers" - the foreign-born children of illegal immigrants attending U.S. schools or serving in the military. As many as 740,000 "dreamers" would have their status jeopardized if Trump decides to reverse Obama's executive order.

With Trump in office, undocumented immigrants in Chicago are fearing deportation.

Undocumented immigrant Nancy Villa said she never chose to come to the United States. She was 9 years old when her mom brought her from Mexico. But now that she has gotten an education and her mother has worked years at a minimum wage job cleaning bathrooms to support the family, they all hope to stay in the country they call home.

With Trump in office, Villa said she doesn't know if she'll be able to continue her education or if her family will be separated.

President-elect Trump has said in his first televised interview since the election he'll deport 2 to 3 million undocumented immigrants who are known criminals. After securing the border, he said his administration will "make a determination" about the rest of the people who entered the country illegally. That unknown determination makes people like Luis Gomez very nervous. He spoke at a news conference at Lurie Children's Hospital on Monday.

"My dad could lose his job. My family will lose their home, and I might lose my friends and family to deportation and suicide," Gomez said.

Mayor Rahm Emanuel emphasized Monday that Chicago is and will remain a sanctuary city for immigrants concerned about their future.

Donald Trump sat down for his first television interview since being elected president to discuss some of his most controversial campaign promises and how he plans to implement them.

In his first television interview since winning the election, Donald Trump told Lesley Stahl on "60 Minutes" that he is saddened about reports of racial slurs and violence by some of his supporters.

Donald Trump: I would say don't do it, that's terrible, because I'm going to bring this country together.
Lesley Stahl: They're harassing Latinos, Muslims--
Donald Trump: I am so saddened to hear that. And I say, "Stop it." If it-- if it helps. I will say this, and I will say right to the cameras: Stop it.
On 60 Minutes, Trump also seemed to walk back some key campaign promises, from the border wall to whether he will appoint a special prosecutor to investigate Hillary Clinton.
Lesley Stahl: Would you accept a fence?
Donald Trump: For certain areas I would, but certain areas, a wall is more appropriate. I'm very good at this, it's called construction.

Stahl also asked if he planned to appoint a special prosecutor to investigate Hillary Clinton.

Trump refused to say whether he'll put troops on the ground to fight ISIS.

Donald Trump: I want to do the job. We have some great generals. We have great generals.
Lesley Stahl: You said you knew more than the generals about ISIS.
Donald Trump: Well, I-- I'll be honest with you, I probably do because look at the job they've done. All I can tell you is we're going to get rid of ISIS.

In the same interview, Trump said he's "fine" with same-sex marriage as the law of the land, saying the issue was settled by the Supreme Court and "it's done."

"These cases have gone to the Supreme Court. They've been settled. And I'm - I'm fine with that," he added.

Trump spoke to "60 Minutes" from his penthouse apartment with his family by his side. Melania Trump said she's ready for the responsibility ahead.

Melania Trump: I will stay true to myself. I'm very strong and um-- tough and confident. And I will listen myself and I will do what is right and what feels to my heart.

But Ivanka Trump said she's not going to the White House in a formal role.

Ivanka Trump: I'm going to be a daughter. But I've said throughout the campaign that I am very passionate about certain issues. And that I want to fight for them...Wage equality, childcare. These are things that are very important for me, but not in a formal administrative capacity.

Trump also told "60 Minutes" he would eschew the $400,000 annual salary for the president.

The one thing he's not giving up is Twitter. He says if he tweets as president, he will be quote "very restrained."