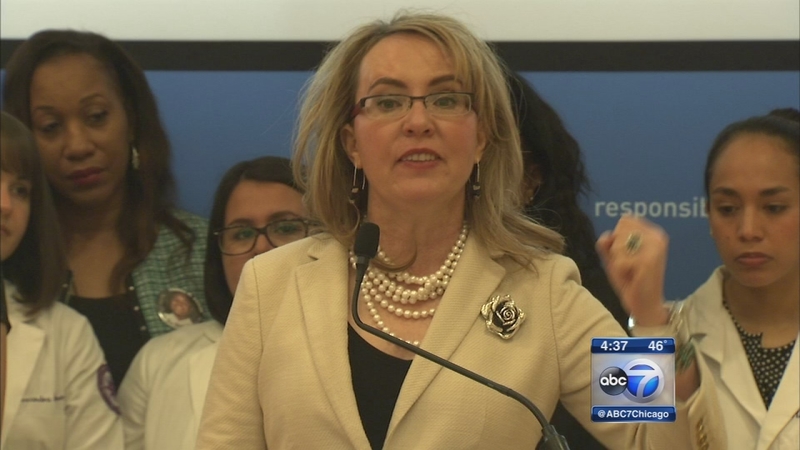 From 2009 to 2013, 40 percent of the guns used in crimes in Chicago came from gun dealers within Illinois. But the group says legal loopholes and a lack of enforcement resources allow illegal guns to be more readily available.

"Stopping gun violence takes courage - the courage to do what's right, and the courage of new ideas. I've seen great courage when my life was on the line," said Congresswoman Giffords. "Now is the time to come together - to be responsible! Democrats, Republicans - everyone."

"This effort is long overdue in Illinois. We've been working on these issues for years, and the key thing I've learned is this: somewhere in the stream of commerce between a gun manufacturer and a crime scene there is someone purporting to be a law-abiding gun owner, buyer or seller who is anything but," said Illinois Senate President Pro Tempore Don Harmon (D-Oak Park).

Between 2002-2014, 14,273 people were killed with guns in Illinois, according to the Law Center to Prevent Gun Violence.

Despite the lasting effect of her gunshot wounds on her ability speak, Giffords remains one of the nation's most eloquent advocates for gun control.

In 2011, the Arizona Democrat was among 18 people shot, including six fatally, as she met with constituents outside a supermarket near Tucson. After the incident came calls for Congress to restrict access to firearms and high-capacity magazines, and gun control advocates have turned their efforts to changing laws state by state.

Among those attending Thursday's news conference was Country Club Hills Police Chief William Jones. His son, Park Forest Patrolman Tim Jones, is recovering after he suffered a brain injury when shot on duty in March.

Illinois State Rifle Association President Richard Pearson says he's aware of the Gun Dealers Licensing Act. He writes on the organization's website that members should be on "high alert" and to contact their state lawmakers to oppose the measure.