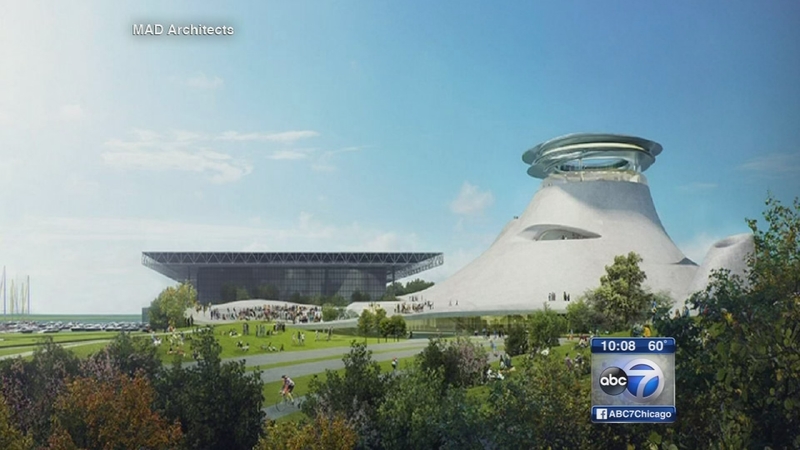 CHICAGO (WLS) -- The wife of "Star Wars" creator George Lucas said Tuesday afternoon that they are "seriously pursuing locations outside Chicago" to construct a Lucas museum.

Mellody Hobson's statement follows statements by the Friends of the Park, a nonprofit suing to stop plans for a lakefront museum by the Chicago Bears' stadium, that indicated it will oppose any plan to build the museum east of Lake Shore Drive.

Hobson, president of Chicago-based Ariel Investments, said the process of identifying a location has been "co-opted and hijacked by a small special interest group."

"My husband and I have worked in earnest for two years, side-by-side with every relevant city agency, community leader, and policy maker, to give what would be the largest philanthropic gift to an American city in the 21st century. From the beginning, this process has been co-opted and hijacked by a small special interest group. When the Friends of the Parks sued the city in order to preserve a parking lot, we were offered a different and feasible solution-the replacement of an underutilized and outdated convention space that would also add more than 12 acres of new parkland. Yet, even with this additional park space, an organization that claims to 'preserve, protect, improve and promote the use of parks and open space' now opposes this as well. While they claim to be a 'strong steward of Chicago and a partner to its progress,' their actions and decision rob our state of more than $2 billion in economic benefits, thousands of jobs and countless educational opportunities for children and adults alike.

As an African American who has spent my entire life in this city I love, it saddens me that young black and brown children will be denied the chance to benefit from what this museum will offer. As Chair of the Board of After School Matters, which serves 15,000 public high school students in Chicago and has more demand than can ever be met, I have seen firsthand what art can do to spur imagination and creativity, heal the soul and advance society-something so needed right now. This is a city of big shoulders and a metropolis that is second to none. In refusing to accept the extraordinary public benefits of the museum, the Friends of the Parks has proven itself to be no friend of Chicago. We are now seriously pursuing locations outside of Chicago. If the museum is forced to leave, it will be because of the Friends of the Parks and that is no victory for anyone."

Friends of the Park had opposed the Soldier Field location, arguing it violates lakefront-development restrictions, and filed a lawsuit. The city had asked a federal judge to stay the litigation for 30 days, and the group had agreed. The city then proposed putting the $400 million art museum where part of the McCormick Place convention complex now stands.

"I don't want to see people go see the Lucas Museum in Los Angeles or San Francisco. I want them to come to the city of Chicago. Create the jobs here, the cultural and educational enrichment here," Mayor Rahm Emanuel said Monday.

Late Tuesday, the city said it had withdrawn its 30-day stay request.

McCormick Place is also by the lake, but construction would involve replacing existing structures, not building where nothing currently stands.

"We do have many folks in our midst that would love to see the McCormick Place East building go, but we don't think that should happen in trade for another building being built on the lakefront," said Juanita Irizarry, executive director of Friends Of The Parks.

Friends of the Park would like the city to come up with a third proposed location, indicating that they would like to see the museum built on the site of the former Michael Reese Hospital.

"Geographically, it's not really that far from the sites that have been discussed, and it doesn't mean that tourists can't get there. And it would be a great way for folks in Bronzeville and other folks who need jobs to have jobs right there," Irizarry said.

Shannon Breymaier, a city spokeswoman said: "We're disappointed and baffled at Friends of the Parks' comments, which are contradictory to the decision they made less than 24 hours ago to stay the lawsuit. Friends of the Parks has taken inconsistent and incoherent positions, making it impossible to work with them."

Father Michael Pfleger, of St. Sabina, was also critical. He said, "What's the real issue? What is the real issue of this elitist group? What are they really against? And who the hell are they to make the decisions that control Chicago?"

Rev. Jesse Jackson, of the Rainbow PUSH Coalition, said in a statement Tuesday that he is sadden by the Friends of the Park's decision to oppose the proposed project, also noting the significance of the role of Hobson - an African American woman from Chicago.

"We share the zeal of the Friends of the Parks to protect our cherished green space and lakefront. But the Rainbow PUSH Coalition is making a moral appeal to the Friends of Parks to reconsider its opposition to a project that will bring so much to Chicago. The Lucas Museum will add nearly 13 more acres of green space on our beloved lakefront. If necessary, we too will be in the courts and the streets, arguing for this once-in-a generation opportunity. In the history of our country there has never been a philanthropic gift of this size and scale from an African American, in this case an African American woman from Chicago. As I said before, it is time to stop the obstruction and start the construction."