WLS
By Sarah Schulte
EAST CHICAGO, Ind. (WLS) -- Elevated levels of lead and arsenic in the soil at the West Calumet Housing Complex in East Chicago, Ind., is forcing hundreds of people from their northwest Indiana homes.

On Wednesday, the residents learned more about the details of their relocation, which could take two to four months, federal officials said. Vouchers will be given to residents of the public housing complex, which was built more than 40 years ago.

"The voucher allows them to rent on the private market so they are going to be able to move to private housing throughout the area," said James Cunningham, of the U.S. Department of Housing and Urban Development.

The Environmental Protection Agency has expedited the relocation process.

However, EPA workers continued to test Wednesday morning for lead inside the units. The first batch of results are expected to come out Friday.

Regardless, East Chicago Mayor Anthony Copeland decided it's time for the residents to relocate. Officials want to take it one step further by demolishing the buildings, which is one of the oldest public housing complexes in East Chicago.

"Upon finding the testing data, everything indicated that the people needed to be removed immediately and that the cleanup could not be done in place," Copeland said.

Residents packed Wednesday's community meeting where residents learned about how, when and where they will be relocated.

While anger was in the air, many were relieved to know they will be getting vouchers soon from federal government to move anywhere they want.

However, not everyone was in such a hurry to leave, especially some of the older residents who have lived here for decades.

West Calumet Housing Complex is part of an 80-acre site that is on an EPA Superfund priorities list. For decades, the land was home to a lead facility. Elevated lead levels were discovered just as the EPA cleanup was to begin.

Mothers living at the complex said their main priority is making sure their kids are safe. All have been tested by the state, some don't believe that is enough.

"I'm going to take them to their regular doctors to be tested, as well, to make sure that they don't have any lead in their system," said parent Donnetta Dillon.
Related topics:
east chicagoleadsoil contaminationhousing
Copyright © 2020 WLS-TV. All Rights Reserved.
RELATED 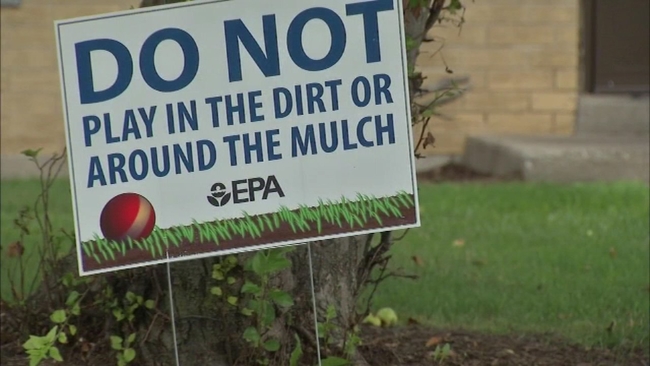