WLS
By Jason Knowles and Ann Pistone
CHICAGO (WLS) -- The I-Team has an update to it's story about a 10-year-old boy and his dreams of making bow ties, as the website owner behind the contract that allegedly did not deliver on his promises is now officially being "investigated" by the Illinois Attorney General's Office.

"D" Joshua Banks appeared at a recent event in a public community center on the city's West Side. He didn't want to talk to the I-Team but consumer reporter Jason Knowles still had questions for him about Maverick Mecheau, 10, an aspiring bow tie designer.

Maverick and his mother Lisa filed a complaint with the Illinois Attorney General's Office alleging that Banks, the owner of the "Scene Chicago" website, did not fulfill the end of the deal.

Lisa Mecheau paid him $5,000 to seek out fashion show opportunities, market and advertise Maverick's portfolio, and assist with "store placement." She and her son claim nothing came of the deal besides some articles posted on Scene Chicago. They also said Banks promised them an opportunity with Michael Jordan in a series of Facebook Instant Messenger texts, although it wasn't in the contract.

"Michael Jordan does not know Joshua Banks, there is no bow tie contract," Lisa Mecheau said.

Janie Lopez also filed an AG office complaint after paying Banks $20,000, she said to secure sponsors for her charity, the Miss Planetary Scholarship Pageant. But the contract didn't make that promise.

"How could you do this to people?" she asked.

Knowles followed Banks through a hallway and asked him these questions:

"What about Janie Lopez? Anything at all? What about Desmond Clark? He had some allegations against you saying that money never got to the Ronald McDonald house," Knowles asked.

"You know there are complaints filed against you with the Attorney General's office? Do you know about the complaints?" Knowles asked.

Banks did not reply.

And the I-Team learned of another claim, this one from Brian Laughlin who paid banks $2,000. Laughlin thought it was to secure sponsors and help him raise money at events, but the contract did not promise that. Banks did write articles on Scene Chicago about Laughlin, similar to the ones on Maverick's bow ties.

Jason Knowles: "Do you have anything at all to say to Maverick?"
Joshua Banks: "You are harassing me, my friend."

Before the I-Team approached Banks at that event, he had refused previous written requests for an on-camera interview. The I-Team also supplied him with a summary of all allegations.
Related topics:
chicagoattorney generalwebsitesi teaminvestigationconsumer
Copyright © 2020 WLS-TV. All Rights Reserved.
RELATED 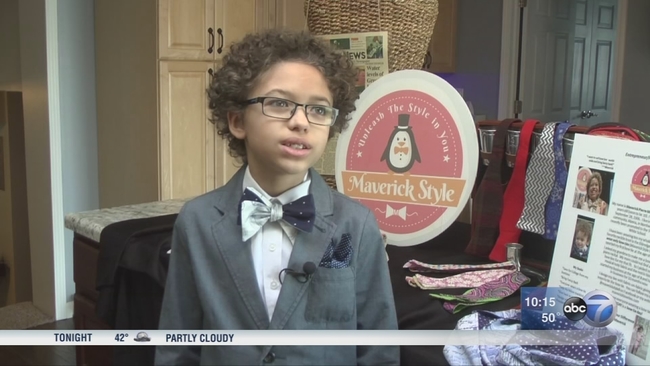