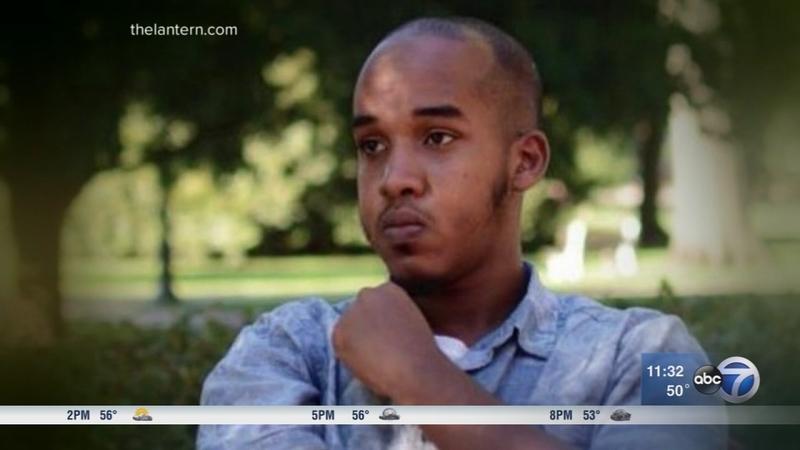 COLUMBUS, Ohio (WLS) -- Ohio State University students returned to class Tuesday, following a rampage that injured 11 people. Investigators said they are confident the attacker acted alone and are trying to determine if he has ties to terrorism.

Homeland Security agents said Tuesday they may have identified a possible motive in the attack.

Investigators said Abdul Razak Ali Artan, 18, had recent social media posts that claimed Muslims were being mistreated in the United States. They said he also recently wrote that if the U.S. wanted to stop lone-wolf jihadist attacks, they should make peace with the terrorist group known as the Islamist State.

Overnight in Columbus, federal agents searched Artan's home, trying to find an explanation for the attack as students and staff returned from Thanksgiving break.

Police received a report Monday that a male driver purposely jumped a curb and into pedestrians.

911: "Fire department."
Caller: "This is OSU. We have a vehicle that struck several pedestrians."

The suspect jumped out of the car, with a butcher knife in hand, and started slashing people near the OSU engineering building.

Dispatch: "Be advised. We got a man with a knife running around, ah, cutting people."

Students learned quickly and took action - some barricading inside classrooms.

"Once we barricaded the door, everyone just sat in the corner and tried to stay away from the windows," said Elise, an OSU student.

One minute after the knife-attack began, a campus police officer took down the attacker. Artan's victims were doing better Tuesday morning.

"At this point we see no reason to be concerned about life-threatening injuries. There are still, as far as my information, four individuals in the hospital. Two at Wexner Medical Center and two others at another local hospital," said Dr. Andy Thomas, Chief Medical Officer, Ohio State University Wexner Medical Center.

Police said the victims were not targeted. Artan plowed his car into whoever was on the sidewalk.

Five months ago, Artan graduated from with honors an Ohio community college, before entering Ohio State.

"So many people who are flipped by ISIS propaganda remotely, look, like they are leading successful lives," said Richard Clarke, a former national security official.

Law enforcement officials said moments before the attack, Artan posted a telling message on Facebook, which started with, "I can't take it anymore."

In recent months, federal law enforcement officials have raised concerns about online extremist propaganda that encourages knife and car attacks, which are easier to pull off than bombings.

The Islamic State group has urged sympathizers online to carry out "lone-wolf" attacks in their home countries with whatever weapons are available to them.

In September, a 20-year-old Somali-American stabbed 10 people at a St. Cloud, Minnesota, shopping mall before being shot to death by an off-duty officer. Authorities said he asked some of his victims if they were Muslim. In the past few years, London and other cities abroad have also seen knife attacks blamed on extremists.

He was recently interviewed by The Lantern, a campus newspaper. He blamed the media for making Muslims feel frightened.

"His main concern was, 'Is it acceptable for me to pray on the Oval right now, before class?'" said Kevin Stankiewicz, The Lantern.

The Artan family emigrated from Somalia. Their neighbors in Columbus were never suspicious.

"It's just very astonishing. You don't know what people are up to now," a neighbor said.