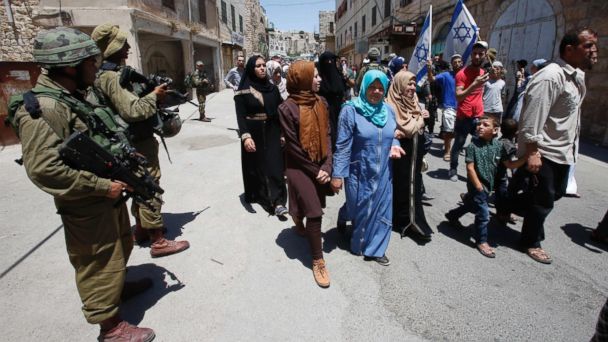 Jerusalem -- Israel is bolstering its troop presence and sealing off Hebron, the occupied West Bank's biggest city, after a 13 year-old Israeli-American girl was stabbed in her bed by a 17 year-old Palestinian teenager on Thursday, and an Israeli man was shot and killed during a drive-by shooting Friday.

"The lethality of the attacks in the past 24 hours have led to a step up in the need to prevent attacks from spilling out on the streets," Israeli Military spokesman Peter Lerner told reporters on a conference call Friday.

These are "the most substantial steps we've taken on the ground" since 2014, Lerner added.

Nearly 700,000 Palestinians will be confined to the boundaries of the Hebron district, except for humanitarian emergencies.

Lerner said that at least 80 attacks on Israeli citizens have originated from, or near Hebron, since last fall. Several hundred extra Israeli soldiers will be deployed to Hebron to enforce the closure, putting "boots on the ground" in main locations to set up checkpoints. The Israeli military did not provide an end date to the closure.

Michi Mark, 48, was driving Friday afternoon with two of his 10 children and his wife when their car took gunfire from a passing car. Mark lost control of the car, causing it to flip, killing him and wounding his wife and two children.

Today's shooting followed an incident inside Hebron at the Tomb of the Patriarchs, where a Palestinian woman was shot dead after attempting to stab an Israeli police officer. Sara al-Hajuj Atrayera, 27, from the village of Bani Na'im in the Hebron district, was reportedly related to the 17 year-old attacker who was shot dead after killing the American-Israeli teenager in her bed. On Thursday evening in the northern Israeli town of Netanya, a Palestinian from the West Bank town of Tukarem was shot dead after stabbing two Israelis.

Since last September, there have been more than 250 attacks and attempted attacks by Palestinians against Israelis, killing at least 40 Israelis, according to a new report from the Middle East Quartet. At least 140 Palestinians have been killed while carrying out or reportedly carrying out attacks, and at least 60 more were killed by Israeli Security Forces during demonstrations, clashes or military operations, the report said. One Palestinian was killed today during clashes at the Qalandia checkpoint between Ramallah and Jerusalem and the Israeli military has said it is investigating his death.

Earlier Friday, Israeli Prime Minister Netanyahu visited the family of the murdered American-Israeli teen, telling her parents that seeing the bedroom where she was stabbed was "shocking," and that "it reminds us who we are fighting."
Related topics:
abc newsnational
Copyright © 2021 ABC News Internet Ventures.
More Videos
From CNN Newsource affiliates
TOP STORIES