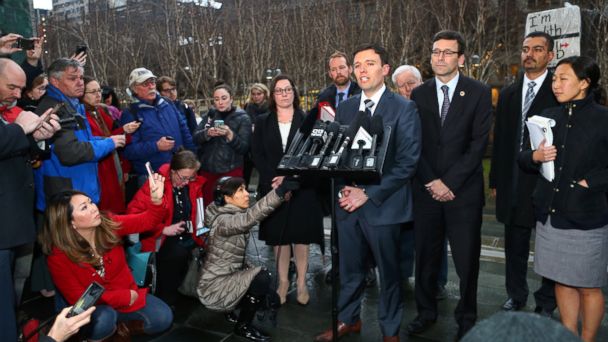 A federal judge in Seattle has issued a nationwide restraining order halting parts of the executive action signed by President Donald Trump that temporarily bars some immigrants and refugees from seven predominantly Muslim countries -- a move that the Washington state attorney general said is "historic" and indicates that "no one is above the law."

The White House ripped the ruling -- which involved the states of Washington and Minnesota -- hours later, at first calling it "outrageous" in a statement and then removing the word from an updated release.

"At the earliest possible time, the Department of Justice intends to file an emergency stay of this order and defend the executive order of the President, which we believe is lawful and appropriate," the updated statement said. "The president's order is intended to protect the homeland and he has the constitutional authority and responsibility to protect the American people."

And on Saturday morning, Trump in a series of tweets wrote, "When a country is no longer able to say who can, and who cannot, come in & out, especially for reasons of safety & security - big trouble! ... Interesting that certain Middle-Eastern countries agree with the ban. They know if certain people are allowed in it's death & destruction! ... The opinion of this so-called judge, which essentially takes law-enforcement away from our country, is ridiculous and will be overturned!"

Shortly after the ruling, an airline official told ABC News that airlines were told by Customs and Border Protection during a call to go back to procedures in place before Trump's executive order took effect, an airline official with knowledge of the call said. The order's implementation sparked widespread confusion and protests at airports around the country.

One of the first airlines to acknowledge the travel ban's suspension was a Middle Eastern carrier, Qatar Airways. "As directed by the U.S. Customs and Border Protection (CBP), nationals of the seven affected countries ... and all refugees seeking admission presenting a valid, unexpired U.S. visa or Lawful Permanent Resident (LPR) card (Green Card) will be permitted to travel to the United States and will be processed accordingly upon arrival."

But foreign airlines have instructed Iranian travel agencies not to sell U.S.-bound flight tickets to Iranians holding U.S. visas, despite the ban being suspended, The Associated Press reported Friday night, citing the Kowsar travel agency in Tehran. The agency said, however, there was no problem for those who have a permanent resident card or a U.S. passport.

The ruling, issued by U.S. District Judge James L. Robart -- a nominee of President George W. Bush who was confirmed 99-0 in June 2004 -- takes effect immediately, said Washington State Solicitor General Noah Purcell during a press conference. Someone overseas who may be waiting to board a flight to the U.S. would now be able to do so and enter the country, according to Purcell.

Washington State Attorney General Bob Ferguson called the decision a "historic" and "important" one. It is his expectation that the federal government will honor the ruling, he said.

"The law's a powerful thing," Ferguson said. "It has the ability to hold everyone accountable to it, and that includes the President of the United States."

According to the judge's order, several sections of Trump's executive action were put on hold because of "immediate and irreparable injury as the result of the signing and implementation of the Executive Order."

"The Executive Order adversely affects the States' residents in areas of employment, education, business, family relations, and freedom to travel," the ruling says.

The affected sections of the order include the 90-day ban on immigration from the seven countries -- Syria, Yemen, Sudan, Somalia, Iraq, Iran and Libya; the 120-day suspension of the refugee program; prioritization of refugee claims made on religious grounds; indefinite suspension of the Syrian refugee program; and prioritizing refugee of "certain religious minorities."

Government lawyers had argued that the restraining order should only apply to the states that brought the case, but the judge ruled that doing so would undermine "a uniform Rule of Naturalization," according to the judge's order.

In his ruling, Judge Robart said "the work of the court is not to create policy or judge wisdom of any particular policy promoted by the other two branches."

"The work of the Judiciary, and this court, is limited to ensuring that the actions taken by the other two branches comport with our country's laws, and more importantly, our Constitution," the judge wrote.

Trump and the administration have denied that the action is directed towards Muslims and White House spokesman Sean Spicer denied it was a "ban."