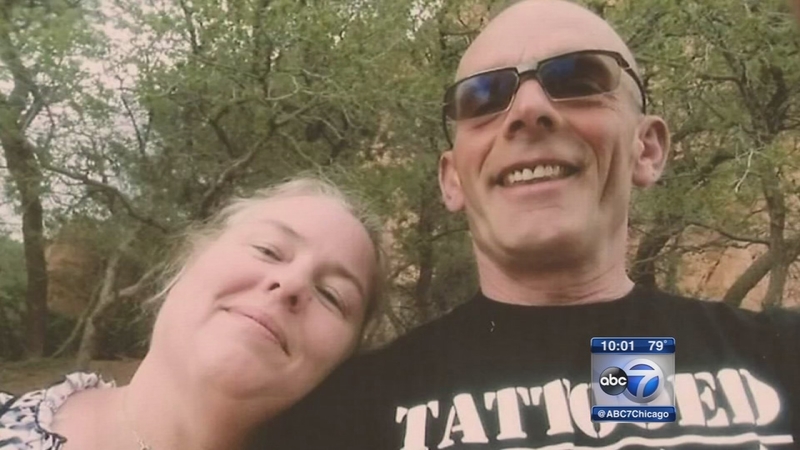 FOX LAKE, Ill. (WLS) -- A vigil was held Wednesday evening by the Northeast Illinois Council of the Boy Scouts of America at Lakefront Park on Nippersink Boulevard in Fox Lake to remember Lt. Joe Gliniewicz, a 32-year veteran of the force whose fatal shooting Tuesday prompted a massive manhunt for three suspected shooters. 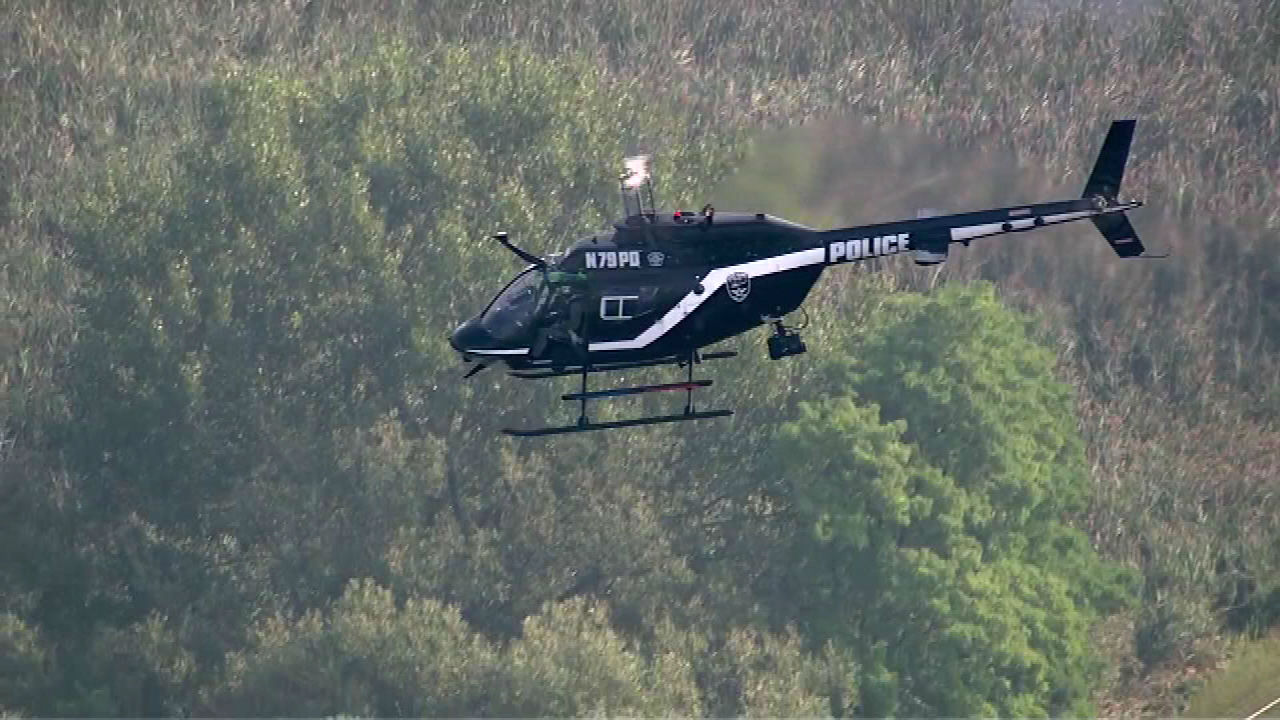 Lt. Gliniewicz's wife and four sons were in attendance, as well as his entire Explorer troop in full uniform. As the family arrived, officers from across the region stood at attention and saluted.

The most powerful words came from Mel Gliniewicz, Joe's wife of 26 years, who addressed the vigil.

Lt. Gliniewicz was remembered fondly by brothers in blue and the young people he led and mentored.

"He was the guy who was always there, out digging, finding out what happens," said retired Round Lake Beach Sgt. Dave Ostertag. "Thank God we have people like that."

"He got me back on track," said Alex Maxwell, a family friend. "I feel for Mel. I feel for all of the kids."

People attending the vigil released blue balloons and lit candles, and yelled on the mayor's count a loud chorus of "We love you, Joe." They also showed their love to his family as the mounted patrol led them away, with officers falling in line.

"My life got smaller," said Mel Gliniewicz. "He truly will be missed by all."

On Wednesday morning, purple and black bunting was put up at police headquarters to honor the 52-year-old married father of four sons, affectionately known as "G.I. Joe." Flowers, balloons and even a G.I. Joe comic were added to the memorial outside of the station.

Lt. Gliniewicz was the first on-duty officer shot and killed in Lake County since 1980. Those who knew him said he devoted his life to his family, his community and young people.

"It's hard to know that one of our own has been taken so brutally. It's just not fair. It's not fair. Joe was a good, good police officer. Joe was father to many," said Ruth Hogan, Gliniewicz's friend. 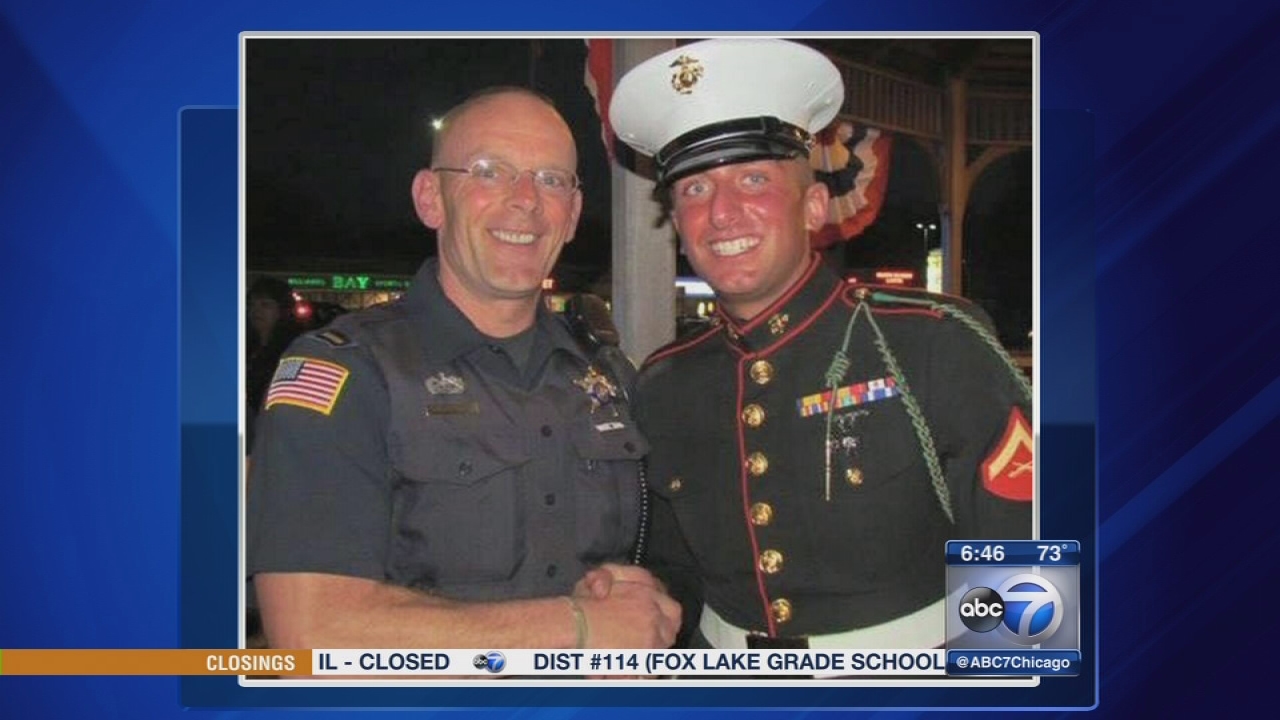 Remembering Lt. Joe Gliniewicz
Hundreds of people have posted condolences to Facebook, Twitter and Instagram since the news of Gliniewicz's death broke. He seems to have made an impact on everyone he met.

Scott Pavlock was an Explorer co-leader and friend who marvels at the impact Gliniewicz had on so many young lives.

"Everybody knew Joe," Pavlock said. "He has in the pictures the media has been showing that smile, that dimple. That was Joe. In the worst situation, he made it funny, he made it good."

Tammy Rivette, a friend of Gliniewicz's, finds it incomprehensible that she's returning to Fox Lake for his funeral. Her sign company is making posters and banners to remember him.

"Joe gave his heart to everybody," Rivette said. "There isn't anything he wouldn't have done for someone."

Devan Arbay is one of the young men Gliniewicz mentored in the Explorer's program. He shared his thoughts on Tuesday, after learning what happened to the man he deeply respected.

"It actually makes me want to become a police officer more, because of this. What happened today is unbelievable. When I heard the news, I didn't think it was going to be him. I thought it would have been him apprehending the suspect, I didn't think it would have been the other way around. When I heard it, I was devastated. My school was in a lockdown. I immediately burst into tears. I just couldn't believe what I was being told. It was truly heartbreaking for me, my Explorers, the community, everyone," Arbay said.

Hundreds of people have posted condolences to Facebook, Twitter and Instagram since the news of Gliniewicz's death broke. Some knew him only in passing, others more intimately, but he seems to have made an impact on everyone he met.

Ross Theel shared a video posted to the ABC 7 Chicago Facebook page and submitted his own thoughts about seeing the officer each day.


"This poor guy would come into the Starbucks in Volo every day with a smile on his face and order for him and his deputies. He is definitely one of the most pleasant people that would come in. My thoughts and prayers are with his family and may he rest in peace," Theel wrote.

Retired Army Sergeant Major Bob Gabriel met Gliniewicz five years ago, after he became a member of the local American Legion post. He called his friend a loving father and consummate professional.

"Everything about him was a professional level. Whether it was addressing children or talking to the adults or members of the community and the people he came into contact with on a daily basis. An upstanding, I say 'young man' because he was younger than I am. He was just great," Gabriel said.

A memorial page has been set up on Facebook.

His reward is being offered through Citizens Offering Police Support - Fox Lake. Anyone wishing to add to the reward can go to any branch of State Bank of Lakes and contribute.