WLS
By Diane Pathieu and Will Jones
EVANSTON, Ill. (WLS) -- Police are investigating after several luxury cars were stolen from a dealership in north suburban Evanston.

Evanston police responded around 12:15 a.m. a report of a disturbance in an alley in the 1000-block of Chicago Avenue. When officers arrived, no one was at that location, but they found a door to the Autobarn Mazda dealership forced open, an unoccupied vehicle that was still running and a garage door standing open.

A door to an office where car keys are kept was also forced open, police said.

A manager confirmed three BMWs were stolen: an X4, a 335 and an X2. Police later discovered a recently-sold Porsche 911 Turbo and a fourth BMW were also stolen.

Chicago police found the X4 and 335 abandoned on North Lake Shore Drive near West Fullerton Avenue and the Porsche near West North Avenue and North Mohawk Street. The dealership said a third BMW had been recovered and a fourth BMW - which has a GPS tracking device - was still missing.

"This is not neighborhood crime here in Evanston. They are targeting a luxury goods store where unfortunately this has been happening in the Chicagoland area and it's not neighborhood folks who are doing this," Wynne said.

In the past, two running cars were stolen from the driveway of the same dealership, but were later recovered.

This isn't the first time cars have been stolen off car lots. Last month, nine cars were stolen from an Infiniti dealership. An Audi was recovered from police more than a week later.

In September, 80 luxury vehicles were part of an organized Chicago theft ring involving four separate gangs on the city's South Side.

There is no word yet on whether all of the cases are related.

"That's something detectives will be looking at, whether they're related as far as the same crew doing it or whether it's just a new method individuals are using," Dugan said.

No arrests have been made in any of the cases.
Related topics:
evanstonchicagolincoln parkluxury vehiclesstolen car
Copyright © 2020 WLS-TV. All Rights Reserved.
RELATED 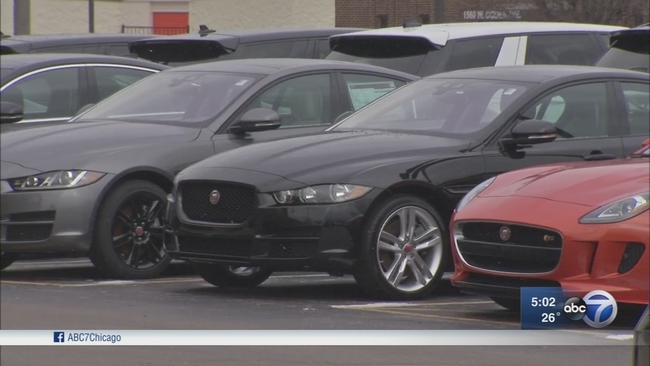