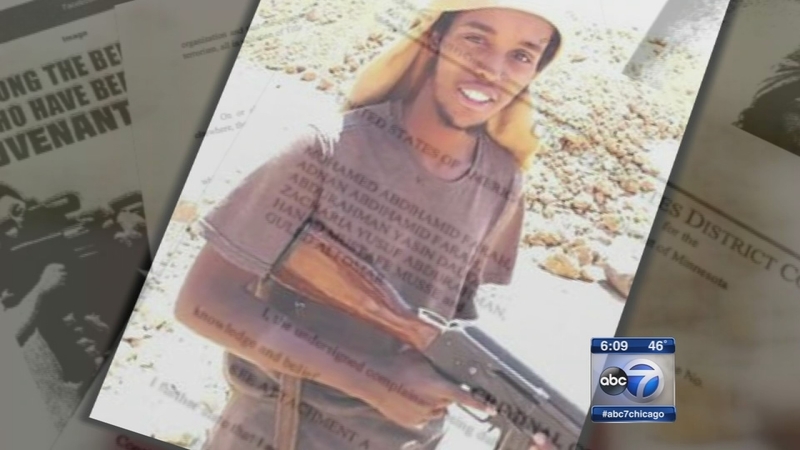 CHICAGO (WLS) -- Six Minnesota men charged with providing support to ISIS had their eyes on O'Hare Airport as a gateway to Syria according to federal investigators.

Federal law enforcement officials say the men were part of a group trying to get to Syria to link up with ISIS. Tonight investigators say the plan involved an O'Hare scouting mission, a reconnaissance trip in and out of Chicago to see if O'Hare might be the most effective gateway to Syria.

The six in custody tonight in Minneapolis are Somali-Americans, said to have been recruited by ISIS leaders overseas to join the jihad.

"To be clear, we have a terror-recruiting problem in Minnesota," said Andrew Luger, U.S. Attorney for Minnesota

Luger isn't alone. From Minneapolis to Chicago, the upper Midwest is a recruiting center for Islamic State terrorists.

In Syria, ISIS leaders have an effective template in place, using social media to recruit young Muslim-American men. Once ISIS has them on the hook, authorities say they convince them to make their way to Syria.

"They have tried to leave the United States from our airport here in Minnesota, from JFK Airport in New York, by bus, by car, and by any means possible," Luger said.

And through O'Hare in Chicago, say federal prosecutors.

According to these federal court records, the six men charged in the latest case relied upon an operative identified only by the initials Y.J., who last June flew from Minneapolis to O'Hare on what they call "a trial run" to determine if there would be any difficulty getting on an aircraft and taking a trip to Syria.

Y.J. is now believed to be in Syria along with an apparent top recruit for ISIS, Minneapolis-bred Somali Abdi Nur who is just 18 years old, about the same age as the six arrested today whom he was trying to recruit to come and join him overseas.

"What is remarkable about this case is that nothing stopped these defendants from pursuing their goal," Luger said. "They never stopped plotting another way to get to Syria to join ISIL. They were not confused young men. They were not easily influenced. These were focused men intent on joining a terrorist organization by any means possible."
Related topics:
isisterrorismi teamu.s. & worldsyria
Copyright © 2021 WLS-TV. All Rights Reserved.
More Videos
From CNN Newsource affiliates
TOP STORIES