Obama Kicks Off Trip to Kenya, Says Africa Is 'On the Move' 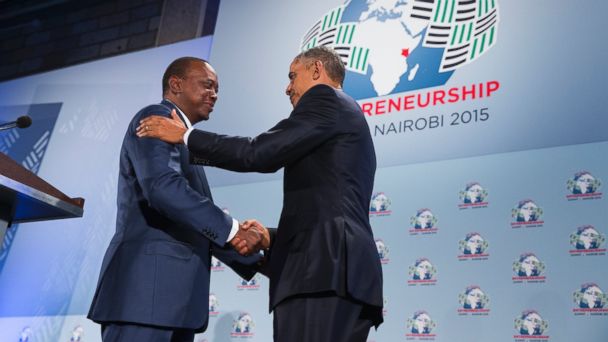 NAIROBI, Kenya -- President Obama kicked off his historic trip to Kenya today with his first public events on his four-day visit to Africa, a continent he said was "on the move."

"I'm proud to be the first U.S. president to visit Kenya," the president said at the Global Entrepreneurship Summit. "Obviously, this is personal for me. There's a reason why my name's Barack Hussein Obama. My father came from these parts."

His first full day in Kenya culminated in a news conference with the country's president, Uhuru Kenyatta, outside the state house where they discussed gay rights, terrorism, and economic partnerships.

Obama also promised Kenyans that he would return without a suit but with special guests to the country where his father was born.

"Here's what I can guarantee: I'll be back," he joked. "The next time I'm back I may not be wearing a suit."

He added that Michelle Obama and his daughter would accompany him on a future trip. Obama also vowed continue his philanthropic work in Kenya.

"I'm not going to stop being interested," he said.

Obama started the day at an economic summit with over 20 members of Congress and 200 American investors to promote U.S.-African trade, technological innovation and his Power Africa initiative, which aims to double access to electricity over five years.

"I wanted to be here because Africa is on the move," the president said.

The president discussed how quickly people can build start-up companies by comparing it to the speed of sending text messages, though he admitted he is not a fast texter himself.

"You can get a start-up moving, and if it's the right idea, it can travel with the speed of -- you know -- how fast you can text," he said.

"I can't text very fast, but I notice Malia and Sasha, they both," Obama said as he made a texting gesture with his hands.

After addressing the summit, Obama met with six business owners who work with Power Africa. From solar panels to mobile phone payment systems, they showed him the inventions and businesses they have started to help spread access to electricity across the continent.

"It's really promising," he said.

The president later paid tribute to the 224 victims of the 1998 embassy bombings in Nairobi and Dar es Salaam, Tanzania. Before the stone-gray wall where the names of the victims are inscribed in black marble, he laid down a wreath of white lilies and red and blue ribbons while flanked by two survivors of the attack.

The somber ceremony in Memorial Park was attended by a few dozen people, including other survivors and National Security Adviser Susan Rice.

Secret Service and Kenyan Security Forces have kept security extremely tight, but where they can, crowds have packed in to try to catch a glimpse of Obama.

The president rounded out his day with his visit to Kenya's state house, where Kenyatta received him with much fanfare.

In their blue uniforms and tall, animal-hair hats with red flowers, the Kenyan Air Force marching band played both countries' national anthems. Led by a Kenyan Air Force officer, Obama then inspected the honor guard before rejoining Kenyatta for a 21-gun salute.

Inside, the leaders and their delegations met for a bilateral meeting, where Kenyatta welcomed Obama and thanked him for his support. The president said the U.S. wanted to be "partners" with Africa "not out of charity, but because we see opportunity."

"It's an added benefit for me that [Kenya] is also a place I love and that it gives me a chance to see old friends and make some new ones," Obama added.

When the president arrived for the trip Friday evening, he was quickly reunited with his Kenyan relatives. His half-sister Auma Obama, who picked him up on his first visit to Kenya in 1988, greeted him on the airport tarmac.

The two siblings then rode together in the motorcade to have dinner with his step-grandmother, Sarah Obama, and three dozen of the president's other Kenyan relatives -- some of whom he had never met before.

"There are cousins and uncles and aunties that show up that you didn't know existed, but you're always happy to meet," he said at today's news conference. "There were lengthy explanations in some cases of the connections. But it was a wonderful time."

Obama also noted that he looks forward to being a private citizen when he will have "freedom to reconnect and be involved and engaged" with his family and provide "hands-on, direct help."

On Sunday, he delivers a speech to the Kenyan people -- the event could draw tens of thousands -- before he spends two days in Ethiopia.