Ominous notes left on hundreds of cars in western suburbs 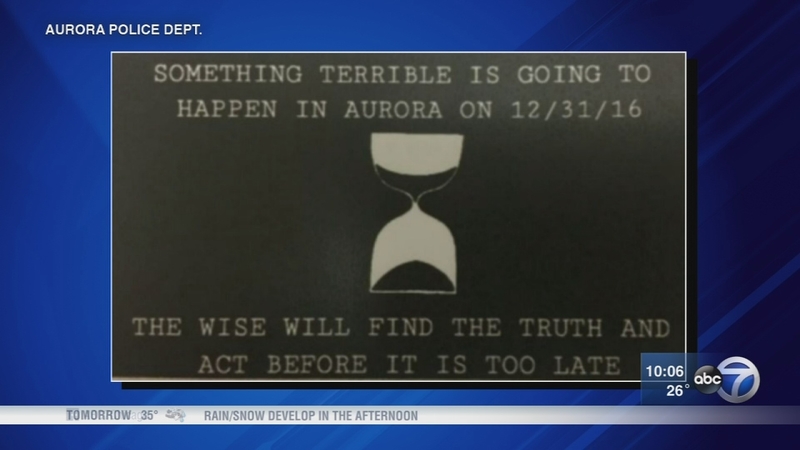 Ominous notes left on hundreds of cars in western suburbs

AURORA, Ill. (WLS) -- Aurora police say a series of notes were left on hundreds of cars in three suburbs warning residents that something terrible is going to happen, but that there's no reason to panic.

The notes were found in South Barrington, Wheaton and Aurora, but Aurora is the only suburb mentioned by name in them.

Police said when they first saw these notes they immediately thought it was some kind of cause trying to get attention. Police said they have scoured the internet and for surveillance video and said there is no threat to the general public, but they do agree the cards are bizarre.

The ominous messages include, "The answer is all around you. But will you find it before the evil deed is done?" and "If you are vigilant and watchful the clues will appear as you travel the roadways".

Those words were printed out across two separate business cards scattered on cars left on windshields around the western suburbs Saturday and Sunday.

"Since then, we've been looking into it, trying to track down maybe who put them on there, who's running this," said Sgt. Don Flowers, Aurora Police Department.

Aurora police believe hundreds of these unsettling cards are circulating. They first came across the puzzling clue Saturday night outside the Fox Valley Mall.

"We haven't been able to track down anything viable or credible to say there's a threat," Flowers said.

One of the cards shows a draining hourglass beneath the seemingly menacing sentence, "Something terrible is going to happen in Aurora on 12/31/16."

"In the climate that we live in people get anxious and that's completely understandable," Flowers said.

Without surveillance video or any further paper or cyber trail, there's not much Aurora police can do but keep watch, ask people to stay vigilant and wait.

"Maybe they're going to come out with a message on the 31st and clear it all up for us," Flowers said.

Just after ABC 7's report on these cards aired, an Aurora police spokesperson called with an update to their investigation. Aurora police believe the threatening notes left on cars were place by an anti-abortion group. Police said a Facebook page linked to the group made mentions of a number of abortions happening in Aurora on New Year's Eve.