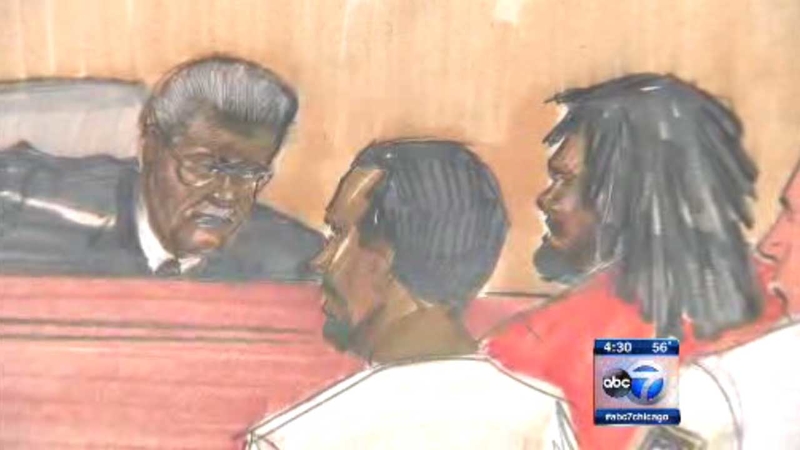 CHICAGO (WLS) -- A person of interest in the shooting death of Tyshawn Lee, 9, was taken into custody on an unrelated gun charge. Corey Morgan, 27, is being held on $1 million bond.

On week ago, the convicted felon was questioned in the boy's death, but released from custody. No charges have been filed in Tyshawn's murder on November 2, 2015.

Chicago police said Tyshawn was lured into a South Side alley and executed in retaliation for his father's gang ties in an ongoing of feud between rival gangs. Tyshawn's father denies those allegations.

Morgan and Dwight Boone Doty, also a convicted felon, were arrested Monday after police received a tip Morgan had firearms, which convicted felons are not allowed to possess. Both had loaded guns on them- Doty's in his waistband, Morgan's in a duffle bag- when they were arrested, a prosecutor told the judge Wednesday.

They were charged with unlawful use of a weapon by a felon as a parole violation and bond was set at $1 million each.

"Good thing the officers made their arrests with their weapons because these weapons may- and I say may- may be the ones that took this young man's life and be responsible for others out there, too," activist Andrew Holmes said.

Police confiscated the weapons are and testing them to see if they're connected to any crimes, a source said.

The dangerous rivalry between the gangs makes getting information difficult no matter the reward .

"If a guy who is a person of interest to the police department and the community is now in jail, if somebody knows something about him or about the event, now is the time to speak," Father Michael Pfleger, who spoke at Tyshawn's funeral, said.

"We have a lot of people in the community that are afraid to even call in and give any information. Everybody is in fear. When you look at one family being afraid of another family, think about this little boy who is not here," Holmes said.

Chicago police will not comment on the particulars of the investigation but said they are using every resource to track down the killer.