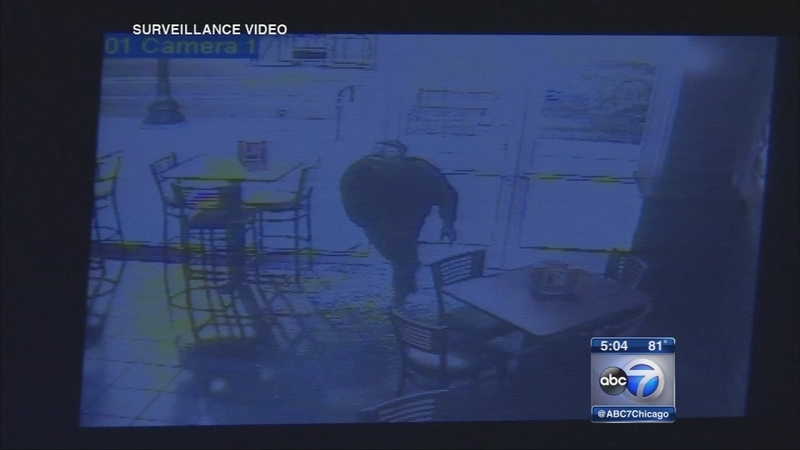 CHICAGO (WLS) -- Surveillance footage could help catch the thief behind a pair of burglaries at a South Loop restaurant in the 600 block of South Wabash.

The owner of this fast food restaurant now has shatter-proof glass on the front doors. In the two burglaries, about $5,000 total have been stolen.

Video shows the thief entering through the front door, glass shattering as the suspect walks in.

"He's a professional. He knows what he's doing. I'm sure this is all he does," said Atiq Rai, Bullchicks Restaurant.

Rai is the owner of Bullchicks Restaurant, which has now been burglarized twice in just over two weeks. The latest break-in happened around 4:30 Monday morning. A surveillance camera captured a man walking up to the glass door and jamming some type of tool where the glass and frame meet.

The burglar then walks away, but returns about three minutes later, climbing through the shattered glass.

He immediately runs to the back of the restaurant, bypassing the cash register, the camera capturing his face for a brief moment.

He's then seen unlatching the back door, seemingly securing a way out before going after the money.

It takes less than a minute for him to steal about $2,000 from a back office and then it's out that back door.

Rai believes this same man is responsible for another burglary August 16. The glass on the adjacent front door, shattered in that crime and $3,000 stolen.

That left door was later replaced by safety glass and Monday morning the suspect seemed to know that, going straight for the other door.

"To me somebody really has confidence that they can get in and get out without any problem," Rai said.

This restaurant is new to the neighborhood. It just opened in July. The owner hoping someone recognizes the man in that video and calls police.