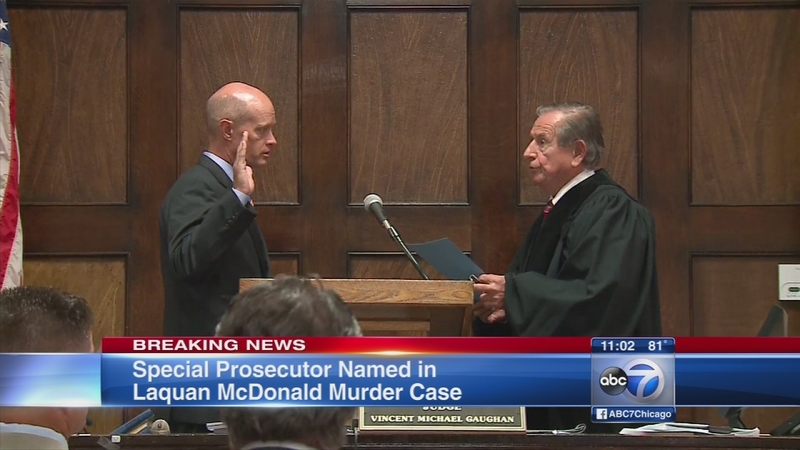 McMahon, 50, has served as the state's attorney in Kane County since 2010. He has now inherited a lightning-rod case that has become part of Chicago history.

McMahon said Thursday that he and his team of four experienced attorneys are ready for the challenge of a very high profile case.

"I and this team has one goal in this case. It is so find the truth present, the truth and ask that justice be served on this case," McMahon said.
Back in May, Cook County State's Attorney Anita Alvarez stepped aside as prosecutor after a chorus of protests calling for her resignation.

Dashcam video shows Van Dyke shot the black teen 16 times in October 2014. The release of that video led to public backlash that sparked major reforms in the Chicago Police Department.

Van Dyke has pleaded not guilty. He appeared in court Thursday with his defense attorney, Dan Herbert, who said they do not object to a special prosecutor. Herbert said he is prepared to defend his client.

However, Rev. Greg Livingston of the Coalition for a New Chicago, is concerned that McMahon may not be the right choice.

"Kane Co. is about 90 percent white, 6 percent black. I wonder what makes him best choice as lead prosecutor, how much has he done in urban situations between black men and police officers," Rev. Livingston said.

McMahon was limited in what he could say after the hearing, due to an order from Judge Vincent Gaughan.

"This defendant, like every defendant that walks into this courthouse, is presumed innocent and is entitled to a fair trial. It is the state's burden - and it will, in fact, be our burden - to prove this defendant guilty beyond a reasonable doubt. I and this team have one goal in this case: that is to find the truth, to present the truth and ask that justice be served in this case," McMahon said.

With one African American prosecutor on his team, McMahon said he and the other prosecutors bring with them years of experience.

"We've had a number of cases over the years and the team and I have put together has prosecuted cases involved in crimes, murders crimes against police officers bring experience team to case," McMahon said.

Jeff Neslund, the attorney who represents Laquan McDonald's family, said he is confident McMahon can be fair.

"The key thing isn't the color of skin, it's the experience to do the right thing and move the case forward," Neslund said.