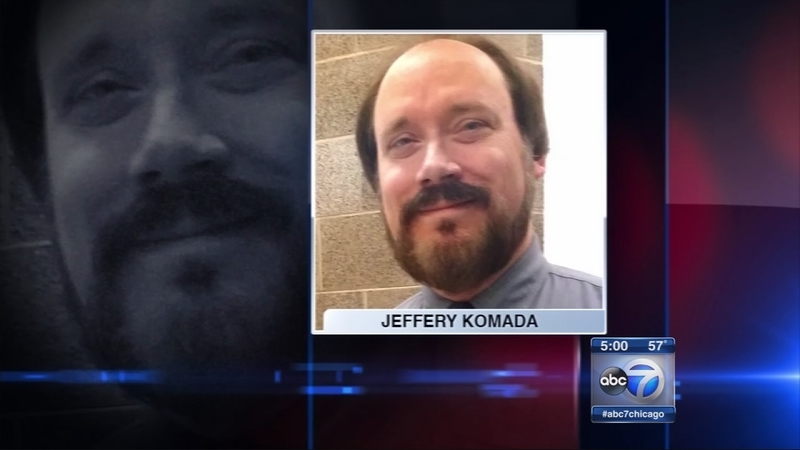 CHICAGO (WLS) -- Taft High School students and staff grappled with the news Monday that beloved teacher Jeffery Komada was killed over the weekend when he was struck by a truck on Interstate 294 in Des Plaines.

Komada, 54, of suburban Des Plaines, was at Taft for 30 years, most recently as the technology direction. He regularly worked 50-60 hours per week with good humor and kindness, his colleagues said. He also was a father of two who took care of his parents.

Komada was killed Saturday when he was hit by a semi-truck on I-294 as he was helping a woman and her child to safety following a chain reaction crash on the tollway. According to Illinois State Police, a Ford Windstar minivan was stalled in traffic when Komada's Honda CR-V rear ended it. The driver of a Volkswagen, the mother with the child, then rear ended Komada's Honda. After the initial fender bender, the mother and daughter were inside Komada's Honda when a semi truck struck Komada, who was standing outside his vehicle.

"That's typically Jeff. He was helping someone else out. That was Jeff," said Mark Grishaber, Taft principal.

A former math teacher, Komada hadn't been in the classroom for years. And yet, he was well-liked by students, and highly respected.

"My jaw dropped and my heart sunk because I've known him since last year and he was always such a great and helpful man," said student Echo Lynch.

He was known as an extremely hard worker who always had time for others.

"He left a legacy to be kind, to be good to people," Whitaker said.

When Komada was given an Educator of the Year award at Taft in 2015, Grishaber said the schools 200 teachers and staff gave him a standing ovation.

Visitation will be 3 p.m. to 9 p.m. Friday at Severino's River Woods Funeral Chapels in Des Plaines. A funeral service will be held 11:30 a.m. Saturday at St. Emily Catholic Church in Mt. Prospect.