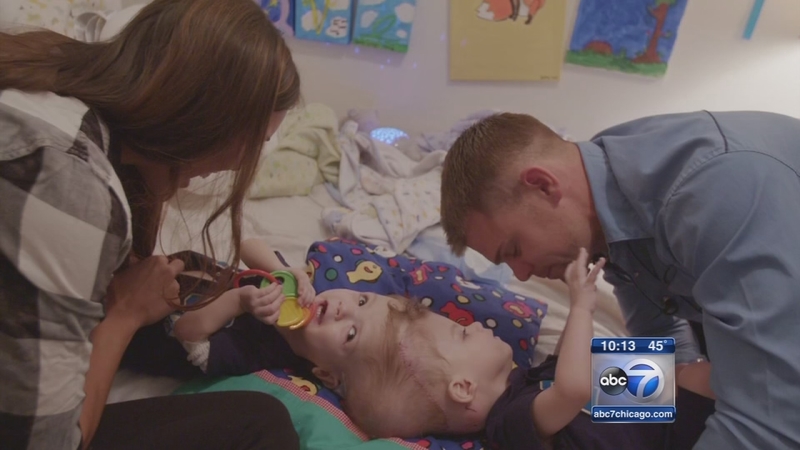 The 13-month old twins from Braidwood, Ill., have been in surgery most of the day at a hospital in New York City.

Jadon and Anias McDonald were born connected at the head, a very rare occurrence. They share nearly an inch of brain tissue.

Faith and family have carried the McDonald clan to the Bronx, in New York, where the surgery is still taking place as of late Thursday night. ABC 7 has been told it is going well.

Parents Nicki and Christian McDonald, along with their three-year-old, have been living there since February, preparing their twins for the day that will change their lives.

If all goes well, rambunctious Jadon and quiet Anias will one day stand and look at each other.

"I could almost keep them like this now. They're so perfect, they are normal little boys, they're normal they are perfect," their mother said.

The McDonalds quit their jobs to give their boys a chance with a New York doctor who promised to separate them methodically. Jadon and Anias share 1.5 centimeters of brain tissue. The procedure may result in one suffering cognitively. Jadon has had more difficulty in their short lives.

"He's got breathing issues, feeding issues, and he has some vision issues, in the beginning his hearing issues, he's had heart failure, seizures, he has had so much happen in the last year and it has rolled off his back," their mother said.

The McDonalds have been able to stay in New York due to the efforts of family and friends back in Braidwood.

The tiny town bordering the tornado-devastated region of central Illinois flattened in 2013 knows sorrow and what it takes to carry on.

"I just never knew that there was that many caring and generous people," John Taylor, Anias and Jadon's grandfather, said.

'Nicki is so inspirational and I would say if I had to pick a hero, she would be my hero she has inspired so many of us through her faith and dedication," Debbi Burroughs said.

As the hours tick by and the surgery carries on 800 miles away, there is a lot of talk of faith and playmates with a new lease on life.

Twins joined at the head are even rarer than one in 200,000. Mother Nicki McDonald, who is a trained a pediatric physiotherapist, told ABC 7 on the phone earlier on Thursday that the surgery continues methodically.

The family will spend months if not years in rehabilitation as she helps the boys meet developmental milestones in the years ahead.

According to doctors that means one of the twins could lose some cognitive function as a result of the procedure. But their parents are holding out hope the boys can one day stand shoulder-to-shoulder.

Doctors say twins conjoined at the cranium is extremely rare and surviving past the age of two without separation is also rare.