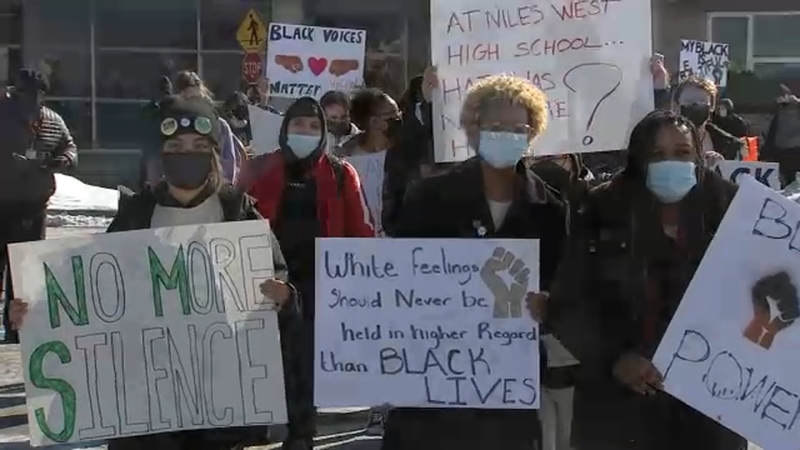 SKOKIE, Ill. (WLS) -- Students of color at Niles West High School, along with some of their classmates, staged a walkout Friday.

They gathered to protest after they claim a group of about two dozen student anti-mask protestors at the suburban school hurled racial slurs, including the N-word, at Black and brown students and staff during a demonstration last week on Thursday.

Sophomore Nadia Ahmed was one of the students targeted.

"They were saying the N-word," Ahmed said. "They were flicking us off. I don't know why they thought that was necessary."

It's unclear if anyone accused of instigating the incident was disciplined by the school.

"Why does it take the publication of discrimination that we are experiencing every single day for our school to finally acknowledge our pain," student Briyanna Manzanares Etinenne said.

The afternoon student-led walkout at the north suburban school was organized with the support of the Evanston/North Shore Chapter of the NAACP.

Although it doesn't appear the incident was captured on cellphone video, organizers said the verbal attacks also included the perpetrators making monkey sounds.

Maggie Vandermeer with the education advocacy group Skokie Schools Equity Collaborative says this is not the first time parents and students have expressed concerns about alleged racial discrimination in the school district.

"We had teachers talking about how there's an anti-Blackness problem in district 219, so we're going to keep showing up," Vandermeer said.

According to the recent data, Black and Latino students make up less than 20% of the district's population.

In an emailed statement, a spokesperson for Niles Township High School District 219 wrote: "We are saddened and furious that our students live in a world where racial incidents occur, and our schools are not immune. We support our students' right to free speech through peaceful protest. As a district, we stand with our students and staff against racism."

Some parents of Black and brown students in support of the protest said in this climate, they continue to worry about the safety of their children.

"I should not have to come to school every day ready to defend myself verbally from racial attacks," student Adam Spellman said. "I should be able to get my education I've worked for and be a teenager."