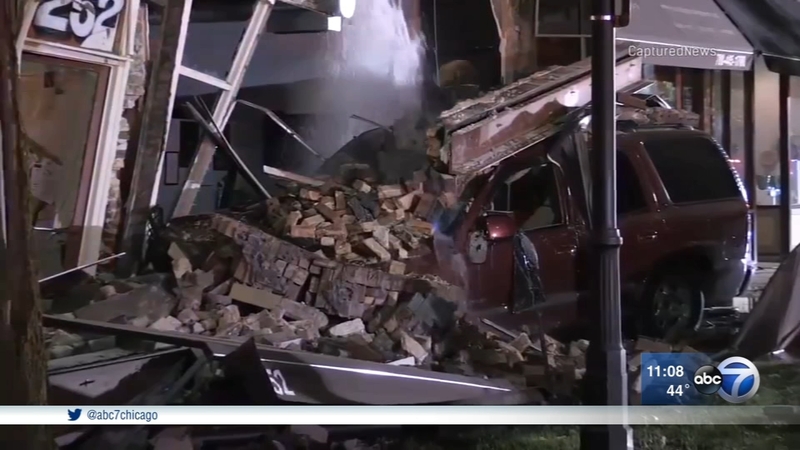 OAK PARK, Ill. (WLS) -- A 25-year-old Chicago man has been charged with with driving under the influence after an SUV slammed into two businesses Thursday morning in west suburban Oak Park, leaving one person injured.

Neighbors woke up to the sound of a crash and saw that a red SUV had slammed into the front of a small strip of businesses in the 200-block of Chicago Avenue at about 2:15 a.m.in Oak Park. Police said the SUV hit a light pole before hitting the businesses.

The crash badly damaged a tattoo parlor and a barbershop that are next door to each other. It was a couple of hours before authorities were able to pull the SUV out as water continued to spew from a broken water main. The entire facade of the building crumbled to the sidewalk.

Oak Park police said Larell Jackson has been charged with driving under the influence, failure to reduce speed to avoid an accident, driving on the sidewalk and operating an uninsured motor vehicle.

One person in the vehicle was transported to Loyola Medical Center with non-life-threatening injuries and the driver and two other occupants in the vehicle refused treatment, police said.

Tim Brown, who owns the building, said he's been in touch with the business owners and they are devastated.

"Unbelievable," Brown said. "I just re-did that and just put new lintels in there, facade and awnings for the businesses that look good less than a year ago, so it's devastating. It's more devastating to them being small businesses and the economy. Where are they going to work? The structure is damaged, so what can you do."

Brown said he's grateful that no one was killed and now they will set their sights to rebuilding.

"All I know is I heard a loud crash, looked out the window and saw that and called 911," said Phil, a neighbor.

The crash is upsetting for the community.

"This whole area is one that we're hoping to build up in terms of having business serving local people, so it's heartbreaking to see that these two have been messed up like this and I'm hoping that they're able to rebuild and get back into business quickly because the neighborhood needs them," said Kris Gallagher, who lives nearby.
Report a correction or typo
Related topics:
oak parkduicar into buildingdui crash
Copyright © 2022 WLS-TV. All Rights Reserved.
TOP STORIES
5 shot, 1 fatally, at State and Chicago, police say
13-year-old carjacking suspect critically injured in police shooting
Marine veteran seriously injured in Irving Park hit-and-run
Could remains in shrinking Lake Mead be tied to Chicago mob?
WI man eats Big Mac every day for 50 years
Man dies after being pulled from Lake Michigan
Oakbrook Terrace fights back after red light camera permit revoked
Show More
911 dispatcher who took Buffalo shooting call put on leave
Chicago Weather: Hot with showers, storms Friday
AREAA Chicago celebrates Asian Pacific American Heritage Month
Chicago 'two-faced' on acknowledging police abuse, filing claims
IL fuel retailers sue over requirement to post about gas tax freeze
More TOP STORIES News