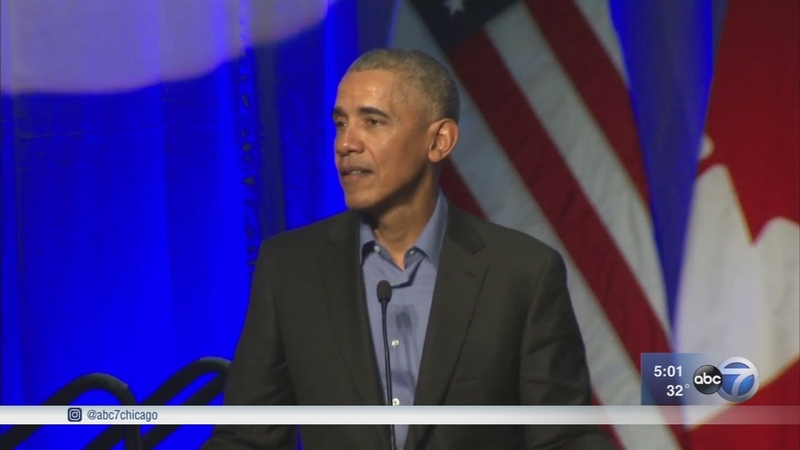 CHICAGO (WLS) -- Former President Barack Obama returned to Chicago Tuesday to join mayors from around the world at a summit addressing concerns about climate change.

The gathering was part of the North American Climate Summit hosted by Chicago mayor Rahm Emanuel. It's the first of the kind for the city.

"2015 was the warmest year on record until 2016 became the warmest on record. That what that tells us the climate is changing faster than our efforts to address it," Obama said. "And that's why I made climate change a priority while I was president."

President Obama signed the Paris Agreement, in which countries committed to reducing emissions and increasing the use of renewable and sustainable energy sources, on Earth Day in 2016 and formally joined the agreement in September of 2016.

President Donald Trump said in June that the U.S. will withdraw from the Paris climate accord.

Chicago's efforts to retrofit buildings, both public and private, by improving heating systems and using more energy efficient lighting to reduce consumption and save money won the city an award from an organization funded by Michael Bloomberg.

Tuesday Paris mayor Anne Hidalgo joined Emanuel and another 50 mayors from around the world in signing the Chicago Charter, their commitment to the tenets of the Paris Agreement.

"The Chicago Charter that we all signed today are specific plans for how we get to 2025. And we can't afford the leadership out of President Trump that has been AWOL on this issue. Can't afford it," Emanuel said.

The mayors said they are taking steps because they believe it's the right thing to do, even if the leadership won't come from Washington. There was also a message for President Trump from north of the border.

"The President of the United States needs to listen to the mayors of the U.S. who lead all these cities and communities who are taking a stand on behalf of a viable future and creating great economic opportunity in that process," said Gregor Robertson, Mayor of Vancouver.

Obama praised the mayors and encouraged them to continue their efforts.

"As a consequence of you seeing meaningful impacts in your own cities and you realizing that you are part of a broader movement, that that inspires you to bolder and bolder work, and that in turn, I think, can inspire a country. And that will inspire the world. So thank you very much for your outstanding work. God bless you," Obama said.

The former president called climate change a generational issue, and highlighted the importance of each city knowing what their own issues are.