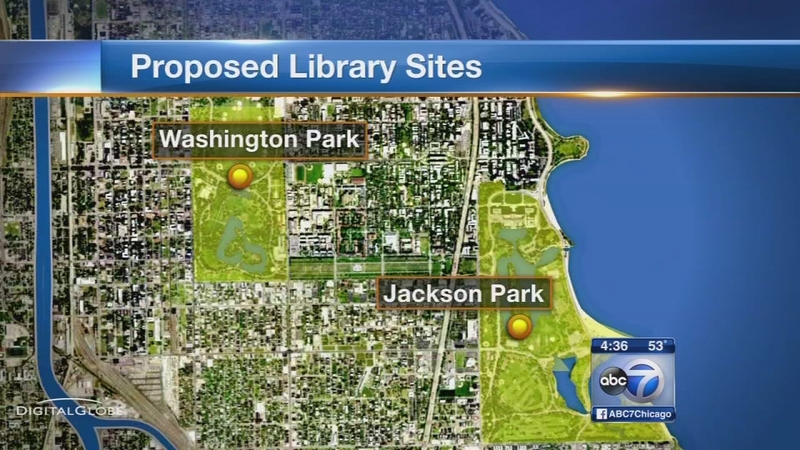 CHICAGO (WLS) -- The Illinois legislature is rushing through a bill that could improve Chicago's chances to win the Barack Obama Presidential Library and Museum, but it seems to be stalled in the governor's office.

In a classic Springfield rush job, the measure backed by Chicago Mayor Rahm Emanuel was introduced Wednesday and passed by both the House and Senate fewer than 24 hours later. But Governor Bruce Rauner is saying "not so fast."

The governor refused to take questions about the bill now waiting for his signature back in Springfield. Legislative leaders say the measure will clarify that Illinois land held in public trust, such as city parks and the lakefront, may be used for museums like the hoped-for Obama Presidential Library and the planned Lucas Museum of Narrative Art.

"What's the definition of the public trust? So we clarified that the public trust includes having the ability to have publicly-run presidential libraries or museums," said Sen. John Cullerton (D).

Its sponsors say they hope the bill will end a lawsuit to stop the Lucas Museum on the lakefront and pre-empt legal action against a presidential library on the South Side.

"We wanted to remove any of those legal hurdles so that the president now can come to where it should be here in Chicago," said Cullerton.

Mayor Rahm Emanuel, who was in Washington earlier this week, initiated the rush to pass the bill as the competition for the library between Chicago and New York intensifies.

The Friends of the Park organization vows to continue to resist buildings on park land writing that, "HB373 not only authorizes the park district to build the Lucas museum or a presidential library but any other building that anyone might call a museum."

Rauner, who apparently was not part of the rush job planned by Mayor Emanuel and his democratic allies in Springfield, has not taken sides on the land use issue and a spokesman told ABC7 Eyewitness News Friday afternoon that whether he will sign the bill is "under review."

The mayor, of course, wants the measure made law as soon as possible to improve the city's bid. It appears now that he, and more critically the Obama Library Foundation, will have to wait for the governor.