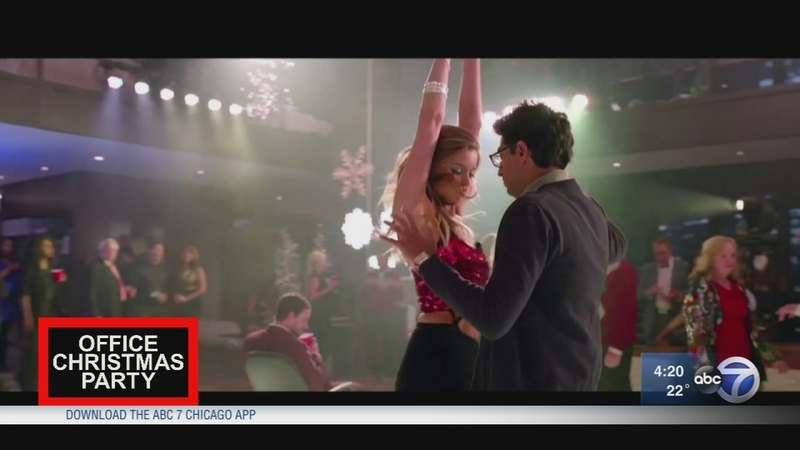 CHICAGO (WLS) -- There's a really wacky holiday display at Millennium Park, right next to the ice rink. It looks more like a pile of junk -- and that's exactly what it is!

The gimmick is a promotion for the new movie "Office Party Christmas", which opens Friday and was shot right here in Chicago. It's about a rowdy, holiday bash where all this stuff ends up flying everywhere!

Eyewitness News reporter Janet Davies talks to the directors who came up with the idea of the outrageous celebration.

The "Office Christmas Party" has to be an epic event this year to impress a key client and close a deal. Otherwise, everyone is fired. Jennifer Aniston is the ruthless boss sabotaging the branch where her brother, played by T.J. Miller, and Jason Bateman's character work.

This is the second time the directors have cast two of their biggest stars, Aniston and Bateman.

"Jen playing a villain and playing Scrooge was a really fun thing to do and that she wanted to do and jason being the center of a big, crazy group of people like he does on Arrested, we were excited to have that happen," director Will Speck said.

The filmmakers gave Chicago a leading role in the movie.

"When we were in film school we connected on a lot of movies that we loved and all of them were oddly set in Chicago - "Planes, Trains and Automobiles," "Risky Business," "The Blues Brothers" - those were all Chicago movies," Speck said.

"We actually opened a book - an architect named Mies van der Rohe, who designed the old IBM building right on the canal, and we said to the studio, this is the building we want to shoot in," director Josh Gordon said.

"We also needed the bridges with the canals. This is the only city in America that has bridges like that that you could jump in a canal and snow in April," Speck added. "We've both been to an office Christmas party. In fact, we used to go to them together which was what was the jumping off point for us to make a movie about
It's the party we wish we could go to. That we now feel like we've been to, and we'll never need to go to again!"
Related topics:
arts & entertainmentchicagoentertainmentmovies
Copyright © 2022 WLS-TV. All Rights Reserved.
TOP STORIES
10 shot, 2 fatally, on Near North Side
13-year-old carjacking suspect critically injured in police shooting
City Council to take up ordinance on curfew changes
Marine veteran seriously injured in Irving Park hit-and-run
Funerals begin for victims of Buffalo supermarket shooting
Could remains in shrinking Lake Mead be tied to Chicago mob?
Man dies after being pulled from Lake Michigan
Show More
Oakbrook Terrace fights back after red light camera permit revoked
911 dispatcher who took Buffalo shooting call put on leave
Chicago Weather: Hot with showers, storms Friday
AREAA Chicago celebrates Asian Pacific American Heritage Month
WI man eats Big Mac every day for 50 years
More TOP STORIES News