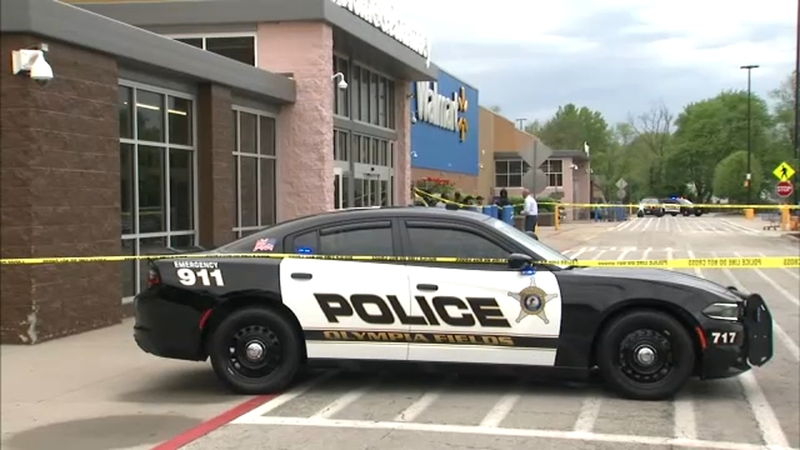 OLYMPIA FIELDS, Ill. (WLS) -- A woman was injured inside a south suburban store after a confrontation on Saturday, police said.

Police responded to an Olympia Fields Walmart around 9:42 a.m. after reports of shots fired.

Robinson said he was working when he heard the gunshots.

An incident at Walmart in Olympia Fields left a woman injured after she "more than likely" hit her head, the police department said.

"We all had to run out the exit door. It was loud noises, everybody was running, carts were flying," he said.

When police arrived, they found a woman with a wound to her head. She was taken to the hospital and has already been released, police said.

Authorities said they were advised by doctors that the wound to her head was not a gunshot wound and that she "more than likely" hit her head on the floor during a struggle.

However, police said their preliminary investigation does indicate at least one shot was fired.

"Never would I've thought in Olympian Fields this would happen. It's just sad. It's really sad and I hope she's OK," Robinson said.

Police said they believe the struggle started when the victim, who is a security guard at the store, confronted alleged shoplifters.

"This is unbelievable," said shopper Ken Gersch. "I'm in shock. I come here all the time. Matter fact I was just here yesterday shopping."

No suspects are in custody as officials look for three people who fled in a car, police said. Authorities said the incident was isolated and there is no threat to the public.

Police did not immediately provide further information about the incident.

"We're deeply disturbed by today's incident and are thankful that the associate involved did not sustain any injuries. We will continue to work closely with law enforcement during their investigations and hope the suspect will be apprehended swiftly and brought to justice."

The Walmart has been closed for the rest of the day and will reopen Sunday, police said.

Police said the investigation is ongoing.