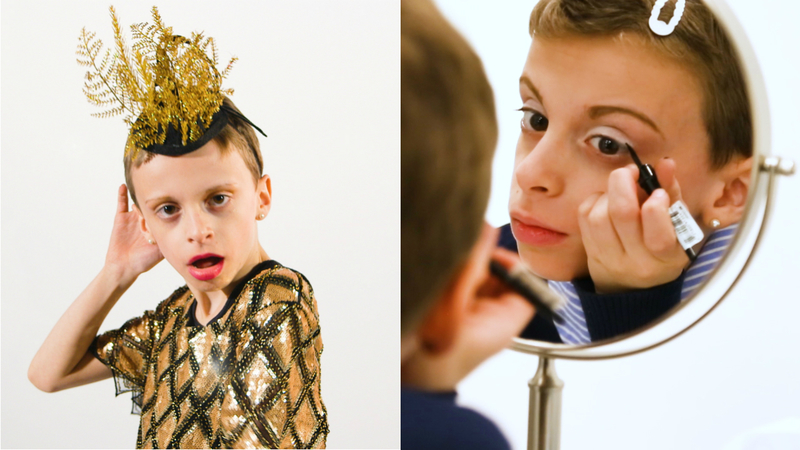 Desmond was born in June 2007, during NYC Pride Week, in Manhattan. As he tells it, this means that he "is a member of the Village People by default".

Desmond now has over 65 thousand followers on Instagram and posts about his experiences and performances. Because he is 10 years old, his mom monitors all of his social media accounts and screens for bullying and hate.

As a toddler, Desmond enjoyed playing dress up by taking bed sheets, towels, bubble wrap and his mother's t-shirts to make his own outfits, dresses and "wigs".

From early on, Desmond said that he is a boy who enjoys dressing up as a girl. Desmond's parents quickly realized that the source of their uneasiness came not from Desmond's personal choices, but from their own misgivings about how the outside world would react. It was as simple as defeating those feelings, accepting Desmond as he is, and respecting Desmond's own tastes and preferences.

His first big break came in 2014 when he was featured alongside the B-52's lead singer, Fred Schneider, in RuPaul's Drag Race season 5 winner Jinkx Monsoon's music video for the song, "The Bacon Shake". This was Desmond's first time playing a character in "drag" and he loved it.

It ignited a passion within him for entertaining others, as well as an understanding of how important it is for people of all ages to express themselves the way they want to.

In 2015, Desmond was the star of NYC Pride March when he danced his way into everyone's hearts in his choice of a rainbow tutu and sparkly gold beret. Overnight, Desmond's story was featured on NewNowNext, Yahoo, Perez Hilton, and Out Magazine. Quickly, he became an internet sensation and was well-known by millions worldwide.

Desmond's mother's acquaintance created a Facebook fan page, called 'Desmond is Amazing' to share his continuing journey with others. The name stuck, and Desmond decided to use it as his official stage name.

Desmond named his fans his "Amazies" and is extremely grateful for their continued love and support.

Desmond prefers to be called a "drag kid", rather than a "drag queen", although he is accepting of the fact that the media almost exclusively refers to him as a "10-year old drag queen". He believes that the term "queen" should be reserved for adult drag performers.

Although an often controversial topic, he would personally like to see more young people discovering a drag style that speaks to their personal truth, but is at the same time, more age appropriate.

Since 2015, Desmond has remained a public source of hope and inspiration for many, especially in the LGBTQ community. He has been featured and mentioned in numerous magazines and online media sites. Desmond was a guest talent at RuPaul's DragCon NYC 2017.

Desmond is the founder of the first ever drag house exclusively for youth, called the Haus of Amazing. His goal is to bring young drag kids, bio queens, drag kings, and anyone else who loves drag together in a safe, positive, worldwide online community.