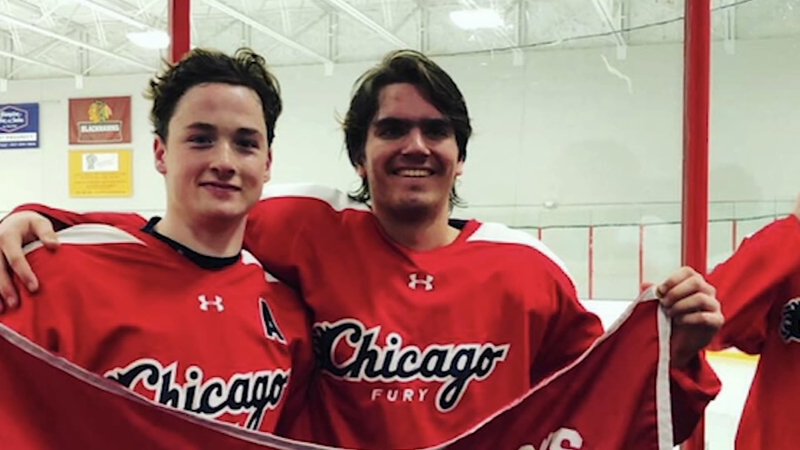 ORLAND PARK, Ill. (WLS) -- A south suburban athletic community is mourning after an 18-year-old hockey player died unexpectedly, a short time after playing in a game.

"I kind of like expected to come to the rink today and have him here, so. I'm kind of in shock still," said Zack Zeidel, teammate.

"I couldn't even walk toward my stuff," said Joseph D'Alessandro, teammate. "I kind of just sat there."

Gabe Remy's teammates on the Chicago Fury said doctors told them he died of complications from mononucleosis, and that they could see signs he wasn't feeling well early last week.

Teammates said Remy started complaining early last week that he felt like he had something similar to the flu. By game time Saturday, it was worse.

"Hunched over a lot. Feeling really tired, said his stomach was bugging him," D'Alessandro recalled. "You could tell he was in a lot of pain. He said there was pain in his shoulder blade, he was throwing up out in the locker room."

But that didn't stop Number 77. The right wing played like he does every game; passionately, hard and spirited.

"He was excited to play. We love our guys to be aggressive and to go out there and compete hard, and he never had a problem competing," said Al Dorich, head coach of the Chicago Fury.

"If it was your first time watching him you wouldn't have known the difference," said D'Alessandro.

Remy made it to the locker room, and barely home from the game. By early Sunday morning, teammates said the teen was in the emergency surgery to repair a ruptured spleen, but it was too late.

Doctors said he died of complications of mono that his ice hockey teammates said he never knew he had. Saturday's game was Gabe Remy's last.

"I think it would have brought him some kind of comfort that he fought through that last game with all the guys that love him, and he loved," D'Alessandro said.